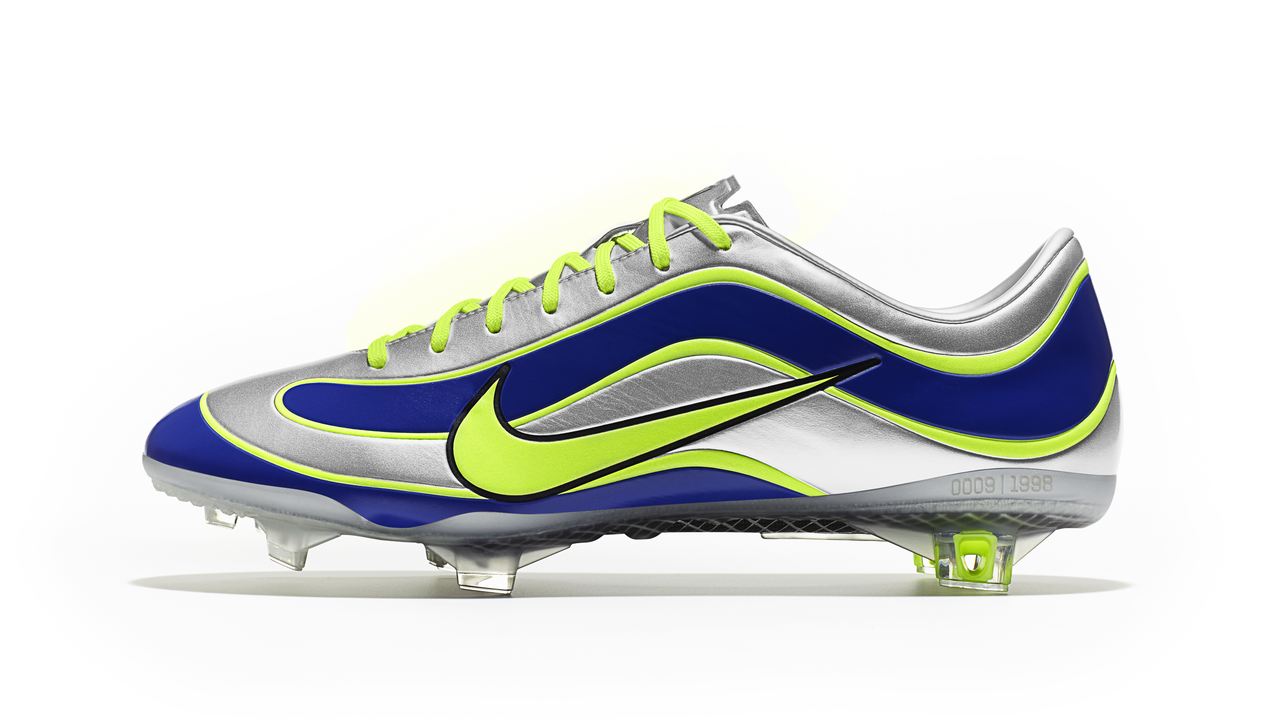 In 1998 Nike launched the first Mercurial football boot — a shoe inspired by and designed for an athlete who was playing an entirely new brand of football. The player was Brasilian football phenomenon Ronaldo Luís Nazário de Lima, popularly dubbed "El Fenómeno," but more commonly known as Ronaldo.

The tagline for the Nike Mercurial launch ad campaign, “Ultralight, so your legs can be as fast as your imagination,” spoke to Ronaldo's unbelievable creativity and speed. Ronaldo not only captured the imagination with his style, speed, skill and instictive eye for a goal, but he also helped reignite the reputation of Brasilian football. His influence continues to guide exceptional players like Neymar as they follow in his footsteps.

Ronaldo is closely associated with the original silver-yellow-blue Nike Mercurial he wore in France during the summer of 1998. Among a field of black and white, the Nike Mercurial stood out for it's sleek shape and colourful, speed-inspired visual design. To celebrate 15 years of the iconic boot, Nike has created a Mercurial Vapor IX inspired by the 1998 design.

“Ronaldo’s impact on the game 15 years ago was immense, and in the run up to 2014, we wanted to celebrate that boot and the man himself. We thought a modern construction of his 1998 boot would be a great commemoration of that moment.” said Phil McCartney, VP of Football Footwear for Nike.

“In the years since the first Mercurial boot was created, modern construction has allowed for a more refined way of making boots. For example, the original version of this boot was constructed of multiple materials stitched together, McCartney elaborated. "This version is a one-piece, seamless upper as per other Nike Vapor Mercurial IX editions.

In addition to rethinking the construction, the team approached the boot with a 2013 visual in mind. The yellow from the 1998 version is replaced by the distinctive Volt hue that became synonymous with Nike design on the running track in London last summer. The original silver is updated with a metallic finish.

1,998 pairs of the Mercurial IX Special Edition will be available from May 8 at select retailers around the world, including nike.com.