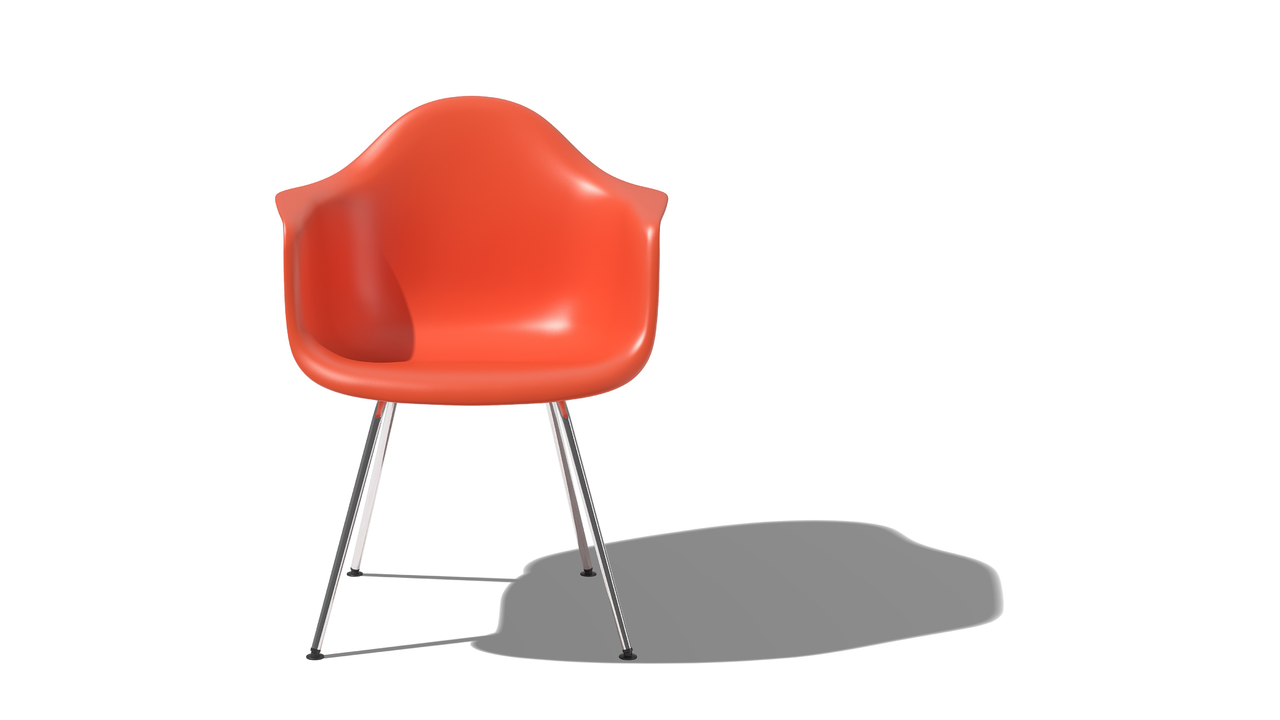 The Eames Molded Plastic Chair, created by Charles and Ray Eames for Herman Miller, is perhaps the epitome of the celebrated couple’s design process—a philosophy characterized by a journey of exploration, evolution, insight and delight. True to this spirit, the Herman Miller Collection, in collaboration with the Eames Office, is reintroducing the Eames Molded Plastic Arm and Side Chair in fiberglass, utilizing a new, more environmentally sensitive material chemistry and manufacturing process. The result is the Eames Molded Fiberglass Chair.

The chair’s now familiar form was already a result of continued refinement when it was first introduced by Herman Miller in 1950 as the first mass-produced plastic chair. The iconic design continued to evolve throughout the years with new colors, height options, base variations, and the application of upholstery. But by the late 1980s it had become evident that the fiberglass reinforced plastic shells, the original “plastic” material, were detrimental to the environment, in both their manufacturing process and at the end of a chair’s useful service. The material chemistry and the inability to recycle the fiberglass led Herman Miller, in consultation with then-widowed Ray Eames, to eventually discontinue its production in 1989. Herman Miller continued to explore alternative materials and began offering a recyclable polypropylene version, reintroducing the Molded Plastic chairs in 2000.

Today, through the development of a more sustainable fiberglass material chemistry, and with a new manufacturing process first developed in the automotive industry to eliminate volatile organic compounds (VOCs) and other Hazardous Air Pollutants (HAPs) in production, Herman Miller is able to once again offer a design icon in the lightly textured surface of fiberglass, while honoring its commitment to environmental sustainability. Herman Miller has also reformulated the color pigments to faithfully reproduce vintage color options while meeting the company’s own demanding Design for the Environment standards.

These achievements came after years of exploration and investment. The fiberglass is now formed and processed using a woven, “dry binder” method instead of the traditional “wet” process, eliminating wet glue adhesives and instead relying on a heat-activated, dry polyester. This has also eliminated the need for thermal oxidizers and other environmental control equipment in the production process. Combined with a new “monomer-free” resin, the production process for the new fiberglass chairs is emission-free and creates a safer environment for the workers handling it, as well as a greener, recyclable shell at the end of the chair’s useful life.

Rounding out this eco-focused effort is the development of Herman Miller’s new “Take Back” program, which will allow both the new fiberglass side and armchair to be recycled at the end of their useful life. The company is initially developing a national network, with the support of its distribution partners in the U.S., to serve as the point of return, with the intent to create additional networks in other regions based on the learning from this first program.

The nine new vintage colors of the Eames Molded Fiberglass Arm and Side Chair can be combined with the choice of wire, dowel leg, four leg, stacking or rocking bases. These new fiberglass options will be available for consumer and commercial order in the summer of 2013.