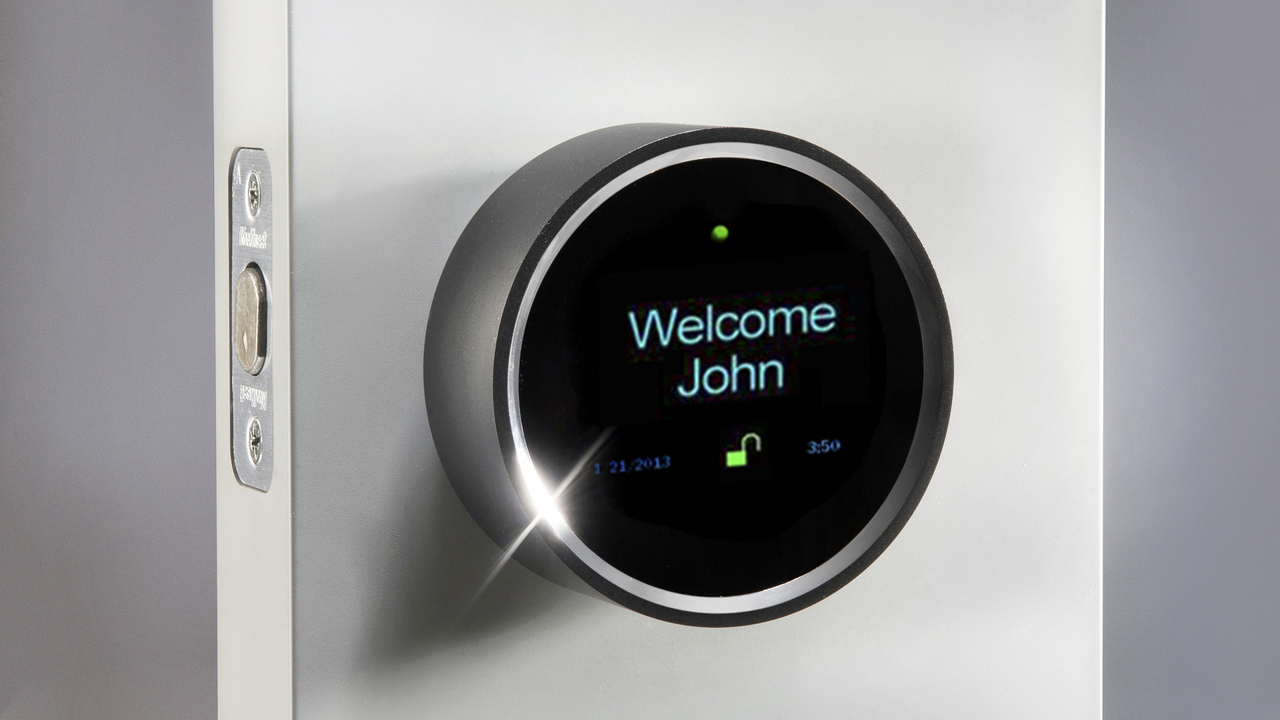 Goji has introduced the Goji Smart Lock, one of the first electronic deadbolts to provide an unprecedented level of home-access control and information—including picture alerts—via smart phones so that homeowners feel more confident and secure about who is coming and going from their homes. The Goji Smart Lock is the only lock that has a built-in camera to send homeowners real-time picture alerts via text and email to give them visual confirmation of who is activating their lock.

Designed by the Goji team of tech, consumer-goods and lock-industry veterans along with an industrial design firm, the Goji Smart Lock presents a contemporary new look for a lock: a sleek, modern disc in brushed metal with a subtle blue-text LED display that welcomes users by name. The Goji Smart Lock works with Bluetooth low energy mobile phones and also works through the home WiFi network, which enables homeowners to operate the lock from anywhere in the world.

“The centuries-old deadbolt lock is undergoing a radical metamorphosis right now that promises to give us previously unimagined control over access to our homes,” said Gabriel Bestard, founder and CEO of Goji, “Being able to send someone a digital key using your mobile phone is just the start. With the Goji Smart Lock, we’re already taking it further by sending picture alerts of anyone who enters your home using their Goji digital key and greeting them by name right on the lock. The future of locks is now.”

With the Goji Smart Lock, homeowners no longer need to carry a conventional key. Instead, their smart phone activates the deadbolt lock when they approach the door. Homeowners can grant day- and time-specific access privileges to people, for example, to visiting friends and family; service professionals such as contractors, house cleaners and dog walkers; and to short-term renters who use services such as Airbnb. Goji digital keys are encrypted using bank-level encryption and cannot be transferred, stolen or copied like a mechanical key can. In case the homeowner misplaces his phone, Goji offers 24/7 customer service to provide assistance.

Featuring patent-pending technology, the UL-listed Goji Smart Lock consists of the battery-operated deadbolt lock, which homeowners can install themselves in the place of an existing deadbolt, four digital keys and two conventional keys. Programmable fobs are also available.

● Picture Alerts: Only the Goji Smart Lock has a built-in camera to send the homeowner real-time picture alerts via text and email that show who is activating the lock. All activity and photos are recorded in a log that the homeowner can access from the Goji mobile app or their Goji-account web page.

● Day and Time Parameters: Homeowners decide exactly when someone can access their home. In a matter of seconds from anywhere in the world, they can send someone day- and time-specific access rights via text or email, and they can revoke them just as quickly through the Goji app or website.

● Sleek Design – Goji Smart Lock’s circular form and brushed-metal finish go with practically all door finishes and styles, and there is no keypad or visible keyhole. A subtle blue LED display welcomes people by name.

● 24/7 Customer Service – Only Goji offers live telephone assistance and a network of locksmiths in case the homeowner misplaces their phone and needs assistance.

● Secure Bluetooth low energy and WiFi: The Goji Smart Lock and digital keys use bank-level security algorithms, 128-bit encryption. The WiFi capability enables homeowners to control the lock from anywhere in the world, and also enables people without Bluetooth low energy mobile phones to use it.

● Key Fobs and Backups– Although optimized for use with a mobile phone, the Goji Smart Lock also offers programmable fobs for those who don’t carry a mobile phone. For backup, the lock also operates with a conventional key by pulling back the digital display to reveal the keyhole.

● Simple to Install: The Goji Smart Lock is designed to be a do-it-yourself, easy install. The system walks users through every step including the Bluetooth low energy pairing and WiFi setup. The lock is battery-operated and sends the homeowner app alerts and text messages when the batteries, which last for one year, start to get low.