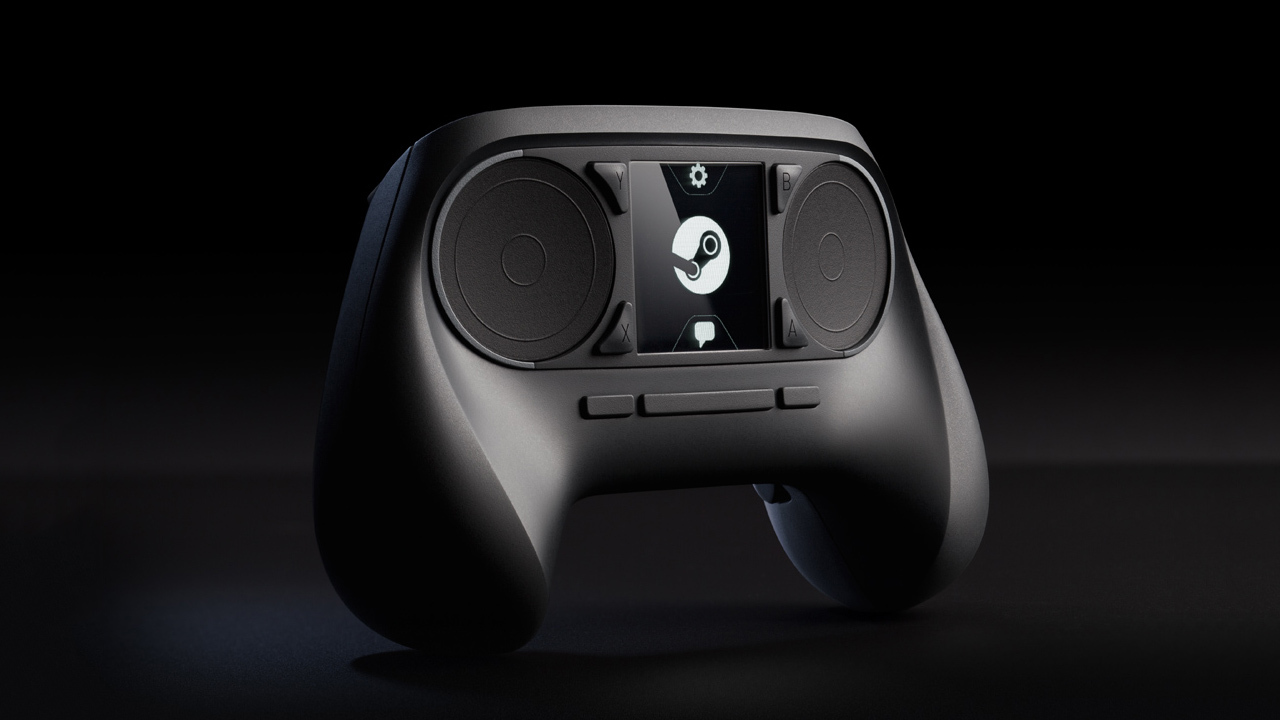 The Steam controller is designed to work with all the games on Steam: past, present, and future. It offers a new and vastly superior control scheme, all while enabling you to play from the comfort of your sofa. Built with high-precision input technologies and focused on low-latency performance, the Steam controller features dual trackpads, haptics, and a touch screen.

Dual trackpads
The most prominent elements of the Steam controller are its two circular trackpads. Driven by the player’s thumbs, each one has a high-resolution trackpad as its base. It is also clickable, allowing the entire surface to act as a button. The trackpads allow far higher fidelity input than has previously been possible with traditional handheld controllers. Steam gamers, who are used to the input associated with PCs, will appreciate that the Steam Controller’s resolution approaches that of a desktop mouse.

Whole genres of games that were previously only playable with a keyboard and mouse are now accessible from the sofa. RTS games. Casual, cursor-driven games. Strategy games. 4x space exploration games. A huge variety of indie games. Simulation titles. And of course, Euro Truck Simulator 2.

In addition, games like first-person shooters that are designed around precise aiming within a large visual field now benefit from the trackpads’ high resolution and absolute position control.

Haptics
Trackpads, by their nature, are less physical than thumbsticks. By themselves, they are “light touch” devices and don’t offer the kind of visceral feedback that players get from pushing joysticks around. As we investigated trackpad-based input devices, it became clear through testing that we had to find ways to add more physicality to the experience. It also became clear that “rumble”, as it has been traditionally implemented (a lopsided weight spun around a single axis), was not going to be enough. Not even close.

The Steam Controller is built around a new generation of super-precise haptic feedback, employing dual linear resonant actuators. These small, strong, weighted electro-magnets are attached to each of the dual trackpads. They are capable of delivering a wide range of force and vibration, allowing precise control over frequency, amplitude, and direction of movement.

This haptic capability provides a vital channel of information to the player - delivering in-game information about speed, boundaries, thresholds, textures, action confirmations, or any other events about which game designers want players to be aware. It is a higher-bandwidth haptic information channel than exists in any other consumer product that we know of. As a parlour trick they can even play audio waveforms and function as speakers.

Touch Screen
In the center of the controller is another touch-enabled surface, this one backed by a high-resolution screen. This surface, too, is critical to achieving the controller’s primary goal - supporting all games in the Steam catalog. The screen allows an infinite number of discrete actions to be made available to the player, without requiring an infinite number of physical buttons.

The whole screen itself is also clickable, like a large single button. So actions are not invoked by a simple touch, they instead require a click. This allows a player to touch the screen, browse available actions, and only then commit to the one they want. Players can swipe through pages of actions in games where that’s appropriate. When programmed by game developers using our API, the touch screen can work as a scrolling menu, a radial dial, provide secondary info like a map or use other custom input modes we haven’t thought of yet.

In order to avoid forcing players to divide their attention between screens, a critical feature of the Steam Controller comes from its deep integration with Steam. When a player touches the controller screen, its display is overlayed on top of the game they’re playing, allowing the player to leave their attention squarely on the action, where it belongs.

Buttons
Every button and input zone has been placed based on frequency of use, precision required and ergonomic comfort. There are a total of sixteen buttons on the Steam Controller. Half of them are accessible to the player without requiring thumbs to be lifted from the trackpads, including two on the back. All controls and buttons have been placed symmetrically, making left or right handedness switchable via a software config checkbox.

Shared configurations
In order to support the full catalog of existing Steam games (none of which were built with the Steam Controller in mind), we have built in a legacy mode that allows the controller to present itself as a keyboard and mouse. The Steam Community can use the configuration tool to create and share bindings for their favorite games. Players can choose from a list of the most popular configurations.

Openness
The Steam Controller was designed from the ground up to be hackable. Just as the Steam Community and Workshop contributors currently deliver tremendous value via additions to software products on Steam, we believe that they will meaningfully contribute to the design of the Steam Controller. We plan to make tools available that will enable users to participate in all aspects of the experience, from industrial design to electrical engineering.