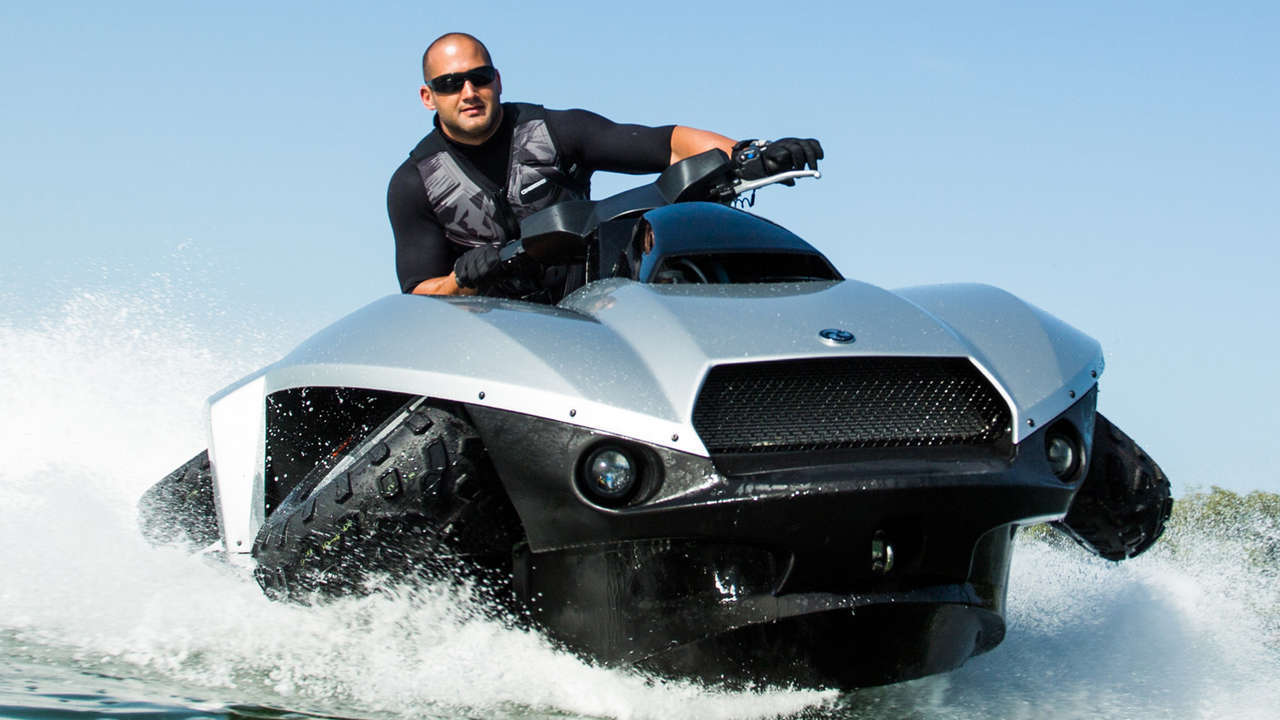 Drive on Land and Water with the Gibbs Quadski

Introducing the world’s first sports amphibian, the GIBBS Quadsk. Developed and built in the U.S., the high speed amphibian (HSA) has a durable, but light-weight composite hull; utilizes proprietary water-jet technology and is powered by a K1300 BMW Motorrad engine and transmission.

The Quadski transitions from land to water in less than five seconds and reaches planing speeds in seconds. The new sports amphibian weighs 1,300 pounds, is equipped with a 15-gallon fuel tank and retails for about $40,000.

Currently available in five colors – red, yellow, blue, silver and black – the GIBBS Quadski already is on sale at two dealerships in Florida and soon will be available at dealership locations in Michigan, New York, Texas and elsewhere in the Midwest and Southeastern United States.

Quadski has a unique retractable suspension system that provides superb ride-and handling on land and then can retract in seconds after entering water. The new HSA’s fourcylinder, water-cooled engine is considered the lightest powerplant in its segment and features electronic fuel injection, a double-overhead camshaft and dry-sump lubrication.

Designed to meet applicable state and federal safety regulations, the Quadski is 10.5 feet in overall length; 5.2 feet in width, and 4.3 feet in height with a wheelbase of 5.8 feet.

The dream of two visionary entrepreneurs -- Alan Gibbs and Neil Jenkins -- the Quadski is the product of millions of research dollars and years of development work in the U.S., the U.K. and New Zealand It is being assembled at a 54,000-square-foot assembly plant in Auburn Hills, Michigan.

“Quadski represents an entirely new form of transportation,” notes Alan Gibbs, the founder of Gibbs Technologies and Gibbs Sports Amphibians. “It is the only sports amphibian in the world capable of reaching speeds of 45 miles per hour on both land and water and can transition between both in less than five seconds.”

Gibbs points out that the companies have more than 300 patents and patents pending on Gibbs High Speed Amphibian technology representing an investment of more $200-million and two-million man hours of work.

“Bringing Quadski to market has been a long uphill battle, but clearly worth the effort,” adds Gibbs Chairman Neil Jenkins. “Quadski is making its public debut at major marine and powersports shows in the United States this year and will pave the way for a host of other Gibbs amphibians designed for consumers, sports enthusiasts, law enforcement agencies and first responders in years to come.”

“Boaters and powersports enthusiasts will like the Quadski’s versatility and Gibbs’ innovative high-speedamphibian technology,” said boat show manager Nicki Polan. “It will definitely be something show-goers will want to check out and we’re especially proud of the fact that it’s manufactured in Michigan.”