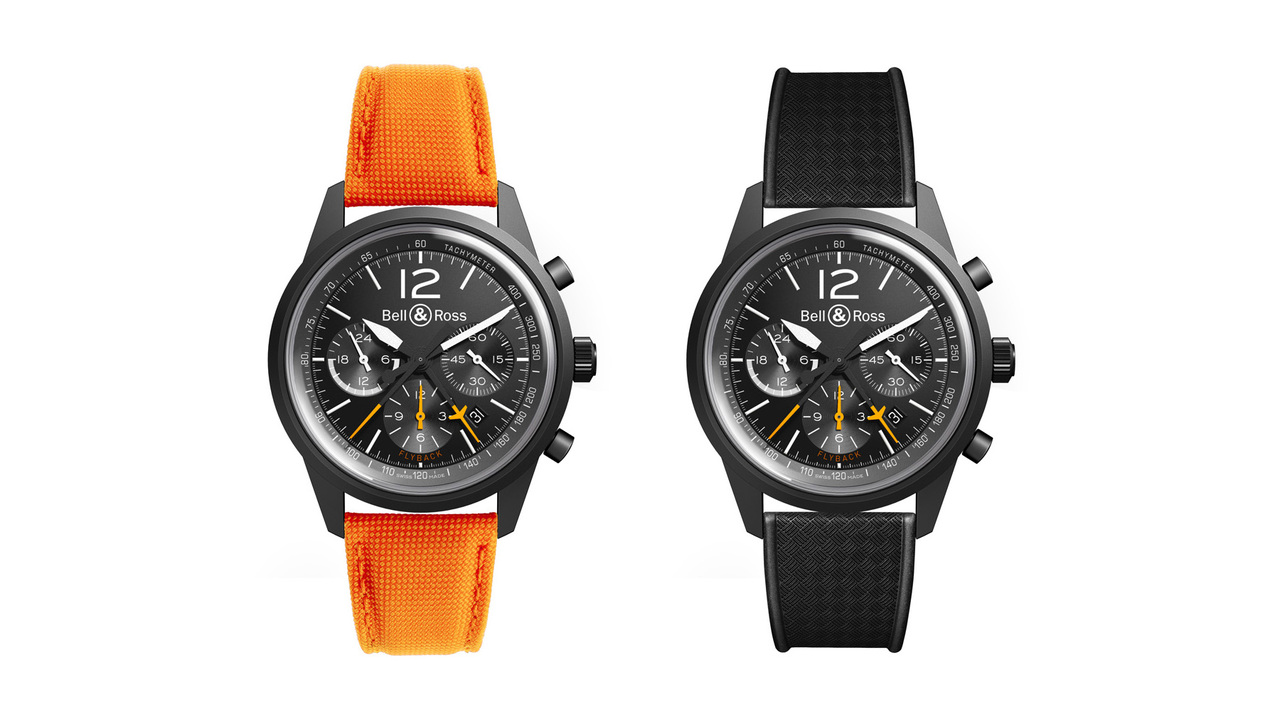 Ever since it was founded, Bell & Ross has made aviation, and more specifically aeronautical instrumentation, one of its main sources of inspiration, both in terms of design and technology. This new watch represents the convergence of all the values of Bell & Ross. Vintage in style, the new BR 126 BLACKBIRD stands out as decidedly modern with its advanced technology and high quality finish. Offering a Flyback function characteristic of the very best aviation chronographs, it pays tribute to the Lockheed SR-71 “Blackbird”, the legendary American plane. The Lockheed SR-71 “Blackbird” developed from 1962 and in service until 1998 — carried out photo reconnaissance missions for the US Air Force throughout the Cold War. The 33m long aircraft, with a wingspan of 17m, was constructed mostly from titanium. Its flat design and matte black color made it very hard to identify, while its capacity to fly at speeds of up to 2000 mph at an altitude of 85,000 feet put it beyond the reach of any interception: 2500 missiles were fired at it without ever reaching any of the 32 planes built!

Although details of its missions remain a military secret, we know that the US spy plane managed to photograph all the most sensitive sites in the former USSR. Its outstanding performance and futuristic appearance give the SR-71 “Blackbird” a definitive role in the annals of aviation. Like its namesake, the Bell & Ross BR 126 BLACKBIRD is matte black in color, giving more prominence to the crucial indications displayed in orange, the color reserved for the most essential information.

In unveiling this watch, Bell & Ross infuses its Vintage collection with an element of modernity. Its round case, the soft lines of its strap fastenings and the curve of its glass instantly identify the BR 126 BLACKBIRD as belonging to the Bell & Ross Vintage collection. However, its materials and its Flyback automatic chronograph movement incorporate the latest technological advances to offer ultra-modern functions promoting legibility and precision. The quality of the steel case (category 316 L, indicating a very high level of solidity and resistance to oxidation), its matte black PVD finish, its 43mm diameter, its sapphire crystal and its water-resistance to 100m make it a modern watch in step with its time.

The Flyback complication was developed for aircraft pilots before the Second World War. It allowed them to instantly stop and restart their chronograph on receipt of radio or visual signals indicating the moment to change course or release bombs. Unlike standard chronographs, requiring successive pressing of buttons to stop, reset and restart the stopwatch function, the Flyback system allows the stopwatch to be stopped and restarted in a single movement. This makes the Flyback complication the best instrument for calculating short time periods. Since legibility of on-board instruments is vital in aeronautics, two colors are prevalent in cockpits: matte black for its anti-reflective properties and white for its extreme legibility. Orange –reserved for essential information also has an important presence and, having always featured on the dials of the Bell & Ross Vintage collection, has become emblematic of the brand. In order to promote the most important information, a touch of orange makes all the indications linked to the chronograph function stand out in contrast against the matte black. To further enhance the watch’s legibility, the chronograph’s central minute and second functions are displayed across the full width
of the dial. The extremely functional Vintage BR 126 BLACKBIRD also provides an instant reading of the time being measured via the central display of the chronograph’s minutes and seconds. While Bell & Ross continues its long-standing relationship with the aeronautical industry by offering a wide range of BR 01 watches with square cases directly inspired by the various on-board instruments in aircraft cockpits, this BR 126 BLACKBIRD adds a new chapter to the history of the Vintage collection and opens new horizons for connoisseurs of character timepieces. Through this dual “modernized vintage” focus, the BR 126 BLACKBIRD merges the past and the future, the spirit of bygone times and ultra-modern technology.