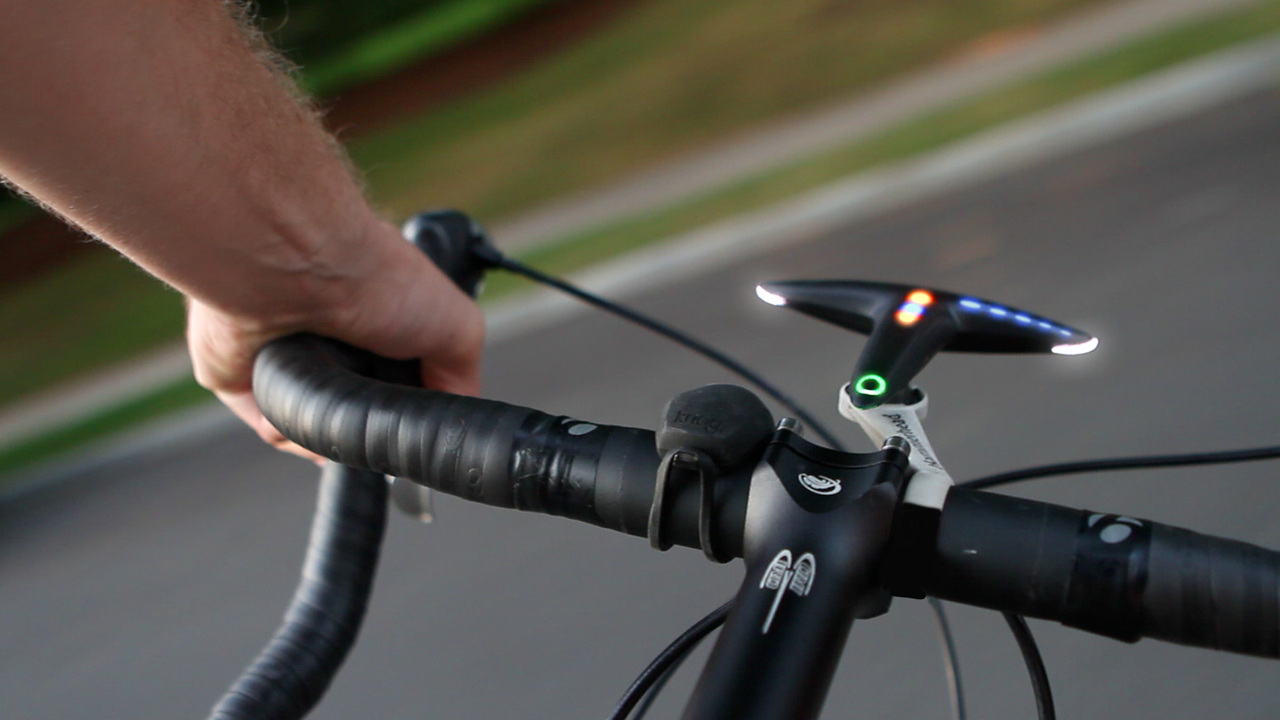 Hammerhead Navigation has created a unique system for commuters to navigate streets and trails with ease. The Hammerhead is a compact, portable device that affixes to handlebars and conveniently guides your ride with an LED light array. The LEDs provide turn-by-turn directions, including when you've ultimately reached your destination. With the new Hammerhead, consumers can download the iPhone or Android app, and receive crowd sourced route suggestions based on their preferences. Once a route is selected, the app communicates via Bluetooth Smart, allowing the phone to remain safely stashed away with its screen turned off. Hammerhead supports the movement for "greener" transportation, and encourages a more viable urban biking community.

Hammerhead is unlike anything currently on the market with its form and function. As the first crowd sourced navigation solution for bike routes, Hammerhead seeks to guide bikers onto safe and desirable bike paths all around the country. Similar to other popular social sharing apps such as Waze, Hammerhead showcases the best bike routes in a user's area. For the first time, users can immediately send routes to others. Hammerhead will also bring real-time feedback to competition on popular apps like Strava and MapMyRide, showing riders how they are doing as their segment unfolds. It will showcase speed relative to competitors speed at any given point in the segment.

Hammerhead is the first device built to work seamlessly with major bike share companies, Bixi and B-Cycle – the companies that offer public bikes for New York's Citibike and other major cities like San Francisco and Boston. When utilizing the "sharing clip," which quickly removes and affixes to handlebars, Hammerhead notifies time that is left on a rental bike, or navigates to the next rental docking station.

Hammerhead doubles as a bike light for night visibility, incorporating a bright headlight and two side lights. It is packaged with a universal handlebar mount and can achieve approximately 15 hours of navigation use. The efficient hammerhead app will allow approximately 6 hours of smartphone use.

"We think there is a huge gap in the biking market, in which we can not only promote safer, more frequent bike riding, but also leverage existing smartphone hardware rather than duplicating it as is done by standalone GPS units," says Hammerhead Founder and CEO Piet Morgan. "Hammerhead offers users a simple, safe and efficient means of navigating." "We are bikers ourselves, and aim to bring the power of real-time social navigation to biking, all in an affordable and simple package."

"This new endeavor with Dragon Innovation is another game changer," says Morgan. "As one of the first companies to collaborate with this new funding platform, we feel a great sense of confidence that we will successfully bring such an intriguing and promising device as the Hammerhead to the market to simplify anyone's ride."