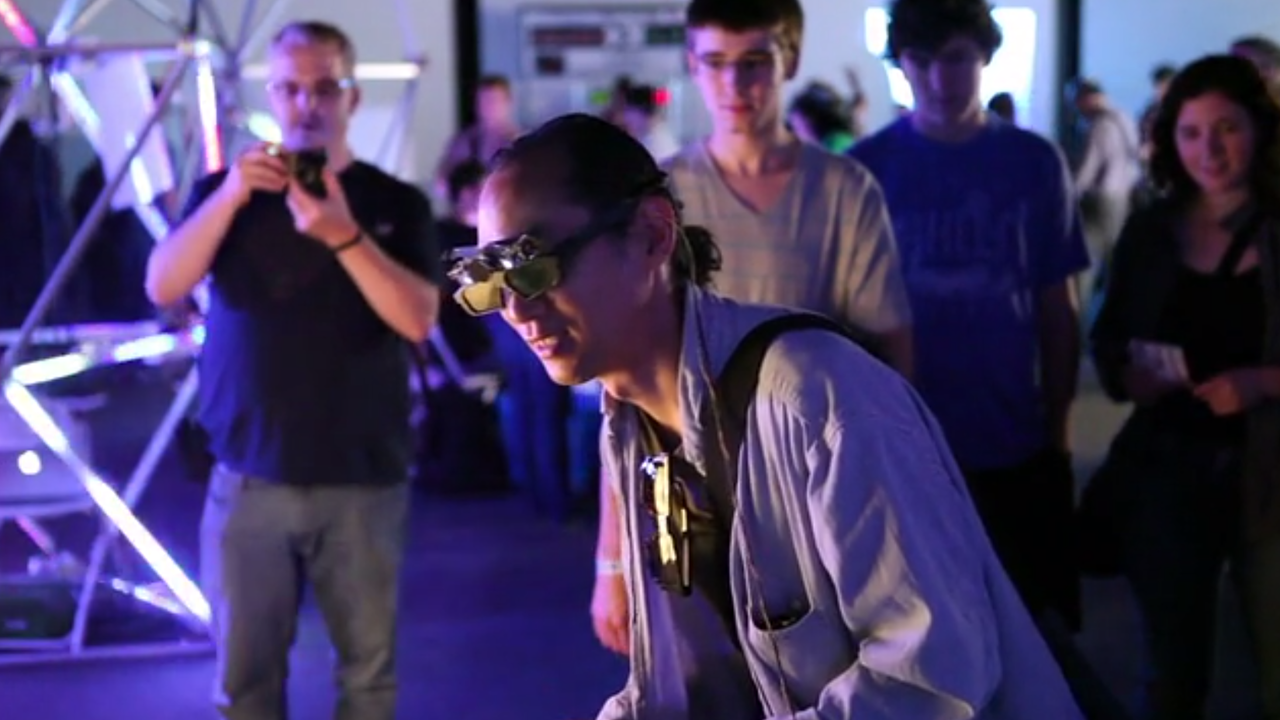 castAR is a projected augmented reality system that displays holographic-like 3D projections right in front of you. Star Wars: Episode IV – A New Hope sparked our imaginations of what might be possible in the future by showing R2-D2 and Chewbacca playing a holographic 3D chess-style game. It has taken nearly 35 years since the film was released for this technological dream to come to reality, but with castAR, that reality can be yours.

castAR includes a very fast and highly precise tracking solution, allowing you to change your experience by holding your 3D world in place while you are free to move around in it.

One primary concern Technical Illusions kept in mind when developing the castAR system was how to bridge the gap between the physical world and the virtual world. They accomplished this through the use of two unique peripherals: the Magic Wand and the RFID Tracking Grid. The Magic Wand is new kind of controller that lets you position things in space and control them with a joystick, all with one hand. The RFID Tracking Grid allows you to uniquely identify, track, and augment physical objects (such as miniatures, cards, and board game pieces) across the surface.

castAR's projected augmented reality system is comprised of two main components: a pair of glasses and a surface. The frames of the glasses contain two micro-projectors—one for each eye. Each projector casts a perspective view of a stereoscopic 3D image onto the surface. Your eyes focus on this projected image at a very natural and comfortable viewing distance. A tiny camera in-between the projectors scans for infrared identification markers placed on the surface. The camera uses these markers to precisely track your head position and orientation in the physical world, enabling the software to accurately adjust how the holographic scene should appear to you. The glasses get their video signal through an HDMI connection. The camera is connected via a USB port on the PC.

The surface is made of retro-reflective sheeting material, similar to the kind used in traffic signs and high-visibility safety clothing. The primary benefit to using this material is that it bounces the majority of light from our projectors directly back toward the glasses with very little scattering. This enables the simultaneous use of a single surface by multiple people while keeping each viewer's view private from the others.

Since your vision is focused at a natural viewing distance, you shouldn't experience eye strain. Projected augmented reality allows you to simultaneously see both virtual and real-world surroundings, so you are spared other sorts of discomfort as well. For example, an important aspect of your body's understanding of the physical world is tied to your inner ear—the part of your body responsible for balance and motion sensing. When you are able to see your physical world, your eyesight and inner ear will stay in sync with your movements. Most people do not feel nausea or motion sickness when using castAR and projected augmented reality.