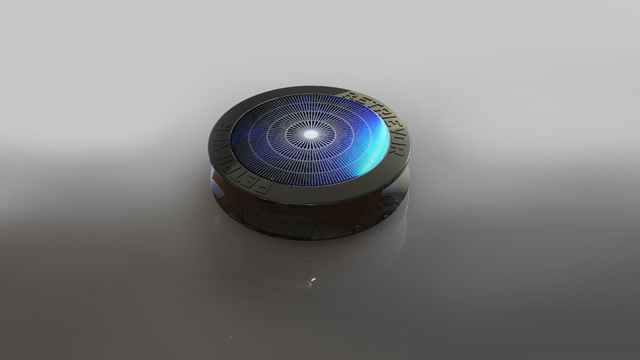 Almost as tiny as a US quarter and not much thicker than four of them stacked together the Retrievor is the smallest end to end GPS solution found anywhere in the world. Offering the most stunning functionality to date, the product is by far the best tracking device in combination with its free Android, iPhone and web apps.

Finally consumers can track just about anything, anytime, anywhere in the world. So say the product’s designers who have recently launched a crowdfunding campaign on Indiegogo with a goal of $80,000. Funding for the device will support various developments, regulatory approvals, volume production orders, back-end technology and design refining.

Measuring 28 mm in diameter with a 10 mm thickness, the tracker’s GPS unit is the industry’s smallest, incorporating a fully integrated module with an on-board antenna. Assuring that tracking can take place indoors as well as when the device is on the move, the Retrievor uses the integration of a SiRFstarIV GPS processor to enable the unit to operate in challenging environments. The product’s innovative GPS firmware can detect changes in context, temperature and satellite signals and will, on its own, update internally. This enables near-continuous navigation while consuming mere micro-watts of battery power.

With the help of smart technology and the inclusion of solar and kinetic charging the Retrievor efficiently manages battery consumption. Using a very small battery fully chargeable via a micro USB cable included in the product’s box, a smartphone adaptor or a standard USB cigarette lighter adapter that can both be purchased in retail outlets the product is highly convenient.

In regard to the Retreivor’s free apps on Android, iPhone and the web, consumers can track their own Retrievor any way they wish. The innovative product’s feature rich applications allow the set up of Geo-Zones which trigger either via text, email or ringtone once the Retrievor moves out of the pre-defined zone. Consumers can pinpoint Retrievor's exact location by zooming in, checking speed, distance traveled and route taken all within an accuracy within 1.5 meters. Map tracking screens are then used to track multiple Retrievor’s with specialized icons for each device.

In no need of a carrier subscription to operate, the Retrievor’s crowdfunding pre-order price includes the first 12 months subscription service. As the product functions almost anywhere in the world using traditional GPS, it is not dependent on GSM connectivity to function. Thinking of everything however, the product’s designers have incorporated GSM to improve spatial resolution, accuracy of between four to ten feet, and improved app functionality. The Retrievor tracking and mapping app’s are initially available in English, German, French, Dutch, Swedish, Norwegian, Danish, Finnish, Spanish and Italian but after the first year of production, designers will incorporate more languages. For utter practicality, the world’s smallest GPS tracker comes complete with a multipurpose clip that makes it possible to attach the Retrievor to most any object or person.