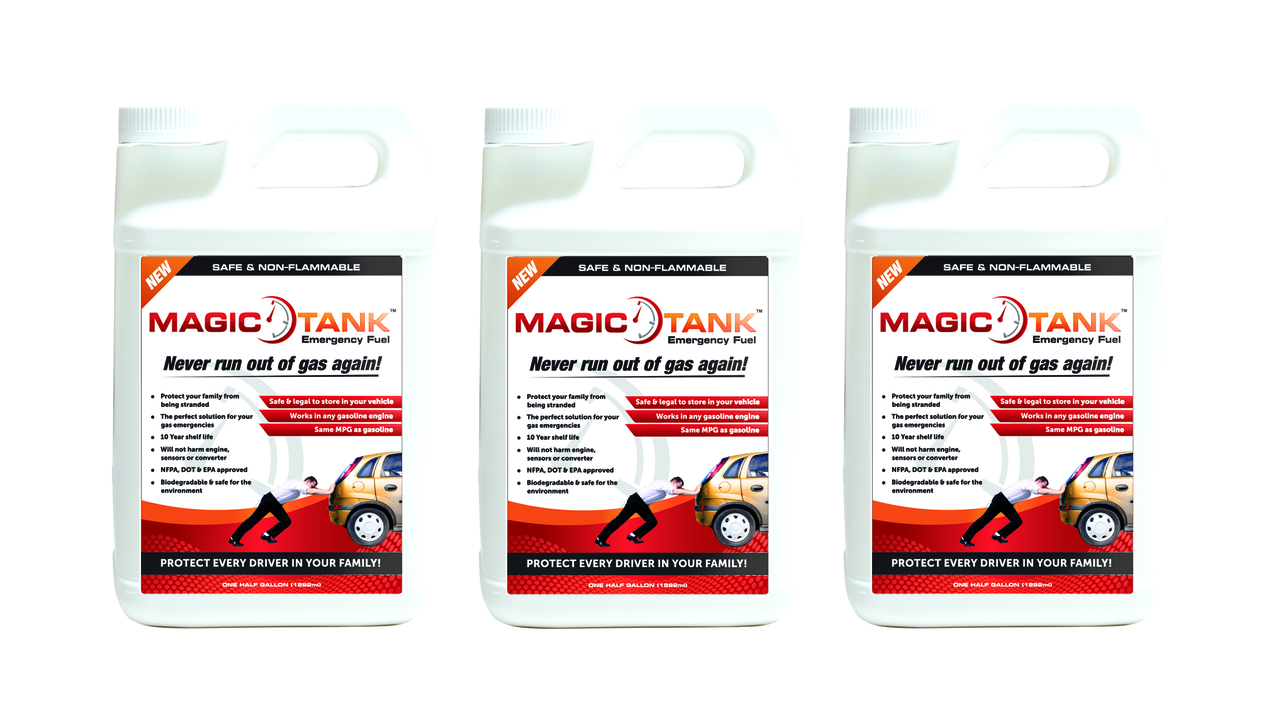 Running out of gas on a deserted highway is the stuff of horror films, but a new product promises to help consumers avoid that scenario. Magic Tank is an emergency gasoline substitute that's safe to store and transport anywhere, and it works in any gasoline-powered combustion engine and is currently available in half-gallon bottles.

Magic Tank works just like gasoline. A gallon of the fuel substitute provides the same gas mileage as a gallon of regular gasoline. Plus, Magic Tank is derived from gasoline, so it won't harm engine components or sensors. It contains no lead or gum forming agents, making it biodegradable as well. One more notable benefit is that Magic Tank degrades only very slowly; with a ten-year shelf life, there's no hassle of buying fresh bottles all the time.
Normally, transporting gasoline containers in a vehicle is against the law. But because Magic Tank does not contain the most volatile compounds in gasoline, it's safe to store in a vehicle. The flash point of Magic Tank is a minimum of 105 degrees. Compare that to gasoline's flash point of around -40 degrees. Under the right conditions, gasoline can spontaneously combust when simply left in a hot car. The National Fire Protection Association rates Magic Tank as combustible, while gasoline receives the higher rating of flammable, meaning that even its vapors can ignite if exposed to spark or flame.

Using Magic Tank is easy. Simply pour it into the fuel tank and go. In a situation where one would otherwise be stranded on the roadside, a half-gallon of Magic Tank provides enough extra fuel to make it to safety. The peace of mind that comes from having a reliable emergency fuel on hand is hard to put a dollar value on.

In the near future, Magic Tank plans to release quart bottles of emergency fuel designed for motorcycles and other small engines, as well as larger containers designed for generators and boats.

Features
● Non-Flammable Safe & Legal To Transport and has a 10 year shelf life
● NFPA, DOT & EPA Rated and compliant
● Will not harm engine, sensors or converter
● Works in any gasoline engine and will give you the same MPG as gasoline at 91 octane