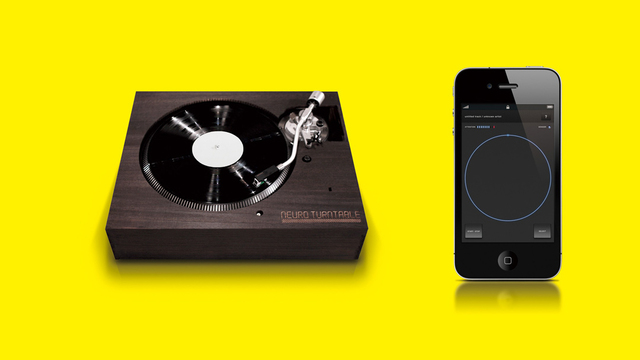 In a not-so-far past, listening to music was not so fast and easy. We would need to put a record on a turntable, and carefully set the needle to start listening. Today, the progress of technology made the cost of listening to music much lower, and we can enjoy music instantly whenever and wherever we like.

Although it became very convenient, didn’t we forget those precious moments when we would take time to listen to music, one song after another? At neurowear, they are developing a new device based on brain waves that will make our relation to music a very special one once again.

The “NEURO TURNTABLE” is a revolutionary concept of music player, which reads neural waves and plays music only when the user is concentrated. The music starts if the user concentrates, and automatically stops is the user starts talking to somebody or thinks about something else.

There is a sort of unconscious dialog between the user and Neuro Turntable, where the user finds out that he might not be really concentrated on music, even when he thought he was. This will lead the way to a new relationship to music, where people will focus more on music to really enjoy it.