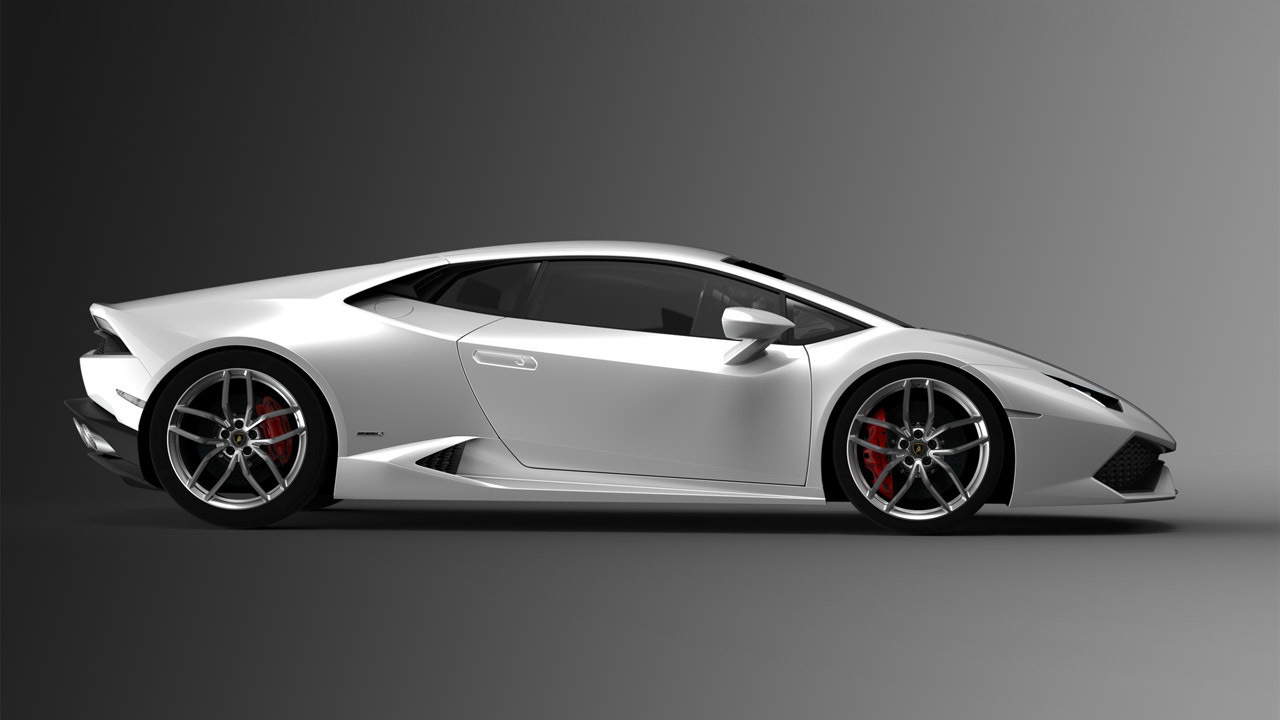 A new era is beginning for Automobili Lamborghini and the luxury super sports car segment: with the brand new Huracán Lamborghini is not only presenting the successor to the iconic Gallardo, but is also redefining the benchmark for luxury super sports cars in this segment. With its pure and unique design, an innovative technology package, outstanding dynamics and excellent quality, the Huracán offers a super sports car experience on a whole new level. The Huracán combines absolute performance with easy-todrive road behavior and both luxurious and sport-oriented finish. With the Huracán, Lamborghini is taking a big step into the future, and enhancing the brand's illustrious history with the next automotive legend.

Starting from January 2014 the Huracán will be the protagonist of over 130 private preview events in more than 60 cities throughout the world. The Lamborghini Huracán will make its world public debut at the Geneva Motorshow 2014.


Name
With a total volume of 14,022 cars produced, the Lamborghini Gallardo has been the most successful Lamborghini ever and, in its ten-year lifecycle, lifted the Lamborghini marque to a whole new level. Its successor, the new Huracán, has been developed from scratch down to the very last detail and, like the Gallardo and most other Lamborghini models, derives its name from the world of bullfighting. The fighting bull Huracán of the Spanish Conte de la Patilla breed was known for his outstanding courage and strong sense of attack. He fought in Alicante in August 1879, showing his unrelenting character and remaining defiant and invincible, thus entering into the legend of fighting bulls' history.

Design
The new Huracán revolutionizes the design language of the Gallardo and is pure in its lines: precise technology and top level craftsmanship meet an audacious design with sharp edges, monolithic and sculptured volumes and precise surfaces. The starting point is the silhouette of the Huracán, born out of the desire of creating an automobile, whose profile is defined by only one line that merges the front with the cockpit and the rear of the car. The lateral windows come together to create a hexagonal form inserted like a glass jewel in the car's profile.

Also by night is the Huracán unmistakably a Lamborghini. Not only are the main headlamps equipped with full LED illumination, but all other light functions also feature state-of-the-art LED technology as a standard feature for the first time in the segment.

Interior
The interior is dominated by an innovative cockpit. A 12.3 inch full-color TFT instrument panel delivers all car information to the driver, from rev counter to navigation maps and infotainment functions, and can be configured by the driver in different setups. Fine Nappa leather and Alcantara distinguish the interior, with several color combinations offered to ensure broad individualization options. The design of dashboard and central tunnel underline a new lightness in the interior. Superb craftsmanship guarantees the highest quality and sense of luxury throughout.

Chassis and Powertrain
Systematic lightweight design and Automobili Lamborghini's extensive expertise in carbon fiber come together in the Huracán's new hybrid chassis -- an integrated structure of carbon and aluminum elements. With a dry weight of 1,422 kg it enables not only the excellent power-to-weight ratio of just 2.33 kilograms per horse power, but also guarantees race-car precision with outstanding stiffness.

The new 5.2 liter V10 engine delivers a maximum power of 448 kW / 610 HP at 8,250 rpm and a maximum torque of 560 Nm at 6.500 rpm. In the new ''Iniezione Diretta Stratificata'' (IDS), direct and indirect gasoline injections are smartly combined. This results in more power and torque with lower fuel consumption and emissions compared with the Gallardo V10 engine. The top speed of over 325 km/h and the acceleration from 0 to 100 km/h in 3.2 seconds and to 200 km/h in 9.9 seconds only partially describe the dynamic experience at the wheel of the Huracán. Also thanks to the Stop & Start technology, the combined EU consumption figure has been further reduced to 12.5 liters per 100 km (290 g/km CO2 emissions). The engine complies with EU6 emissions regulation.

Driving Dynamics
The power of the V10 engine is brought to the road via the new 7-speed dualclutch transmission ''Lamborghini Doppia Frizione'' (LDF) and fully electronically controlled four-wheel drive system. The different driving modes of the Huracán can be selected via a driving dynamics selector switch in the steering wheel - from traction-oriented on the road to extreme performance on the race track, with three setups of the dynamics system: STRADA, SPORT and CORSA. The different modes ensure extensive modification in road behavior of the Huracán. In particular they influence the set-ups of several systems, such as the gearbox and engine behavior, the sound, the four-wheel-drive system and electronic stability control. The Huracán's carbon-ceramic brakes are a standard feature for consistently superb braking performance. The ''Lamborghini Dynamic Steering'' variable steering ratio system and magneto-rheologic suspension damper control are both available as options for further customization of the Huracán's dynamic behavior. They are also calibrated via the three different dynamic set-ups.

The Huracán is produced at the Automobili Lamborghini headquarters in Sant'Agata Bolognese on an entirely newly-equipped production line. Delivery to the first customers is planned for spring 2014.