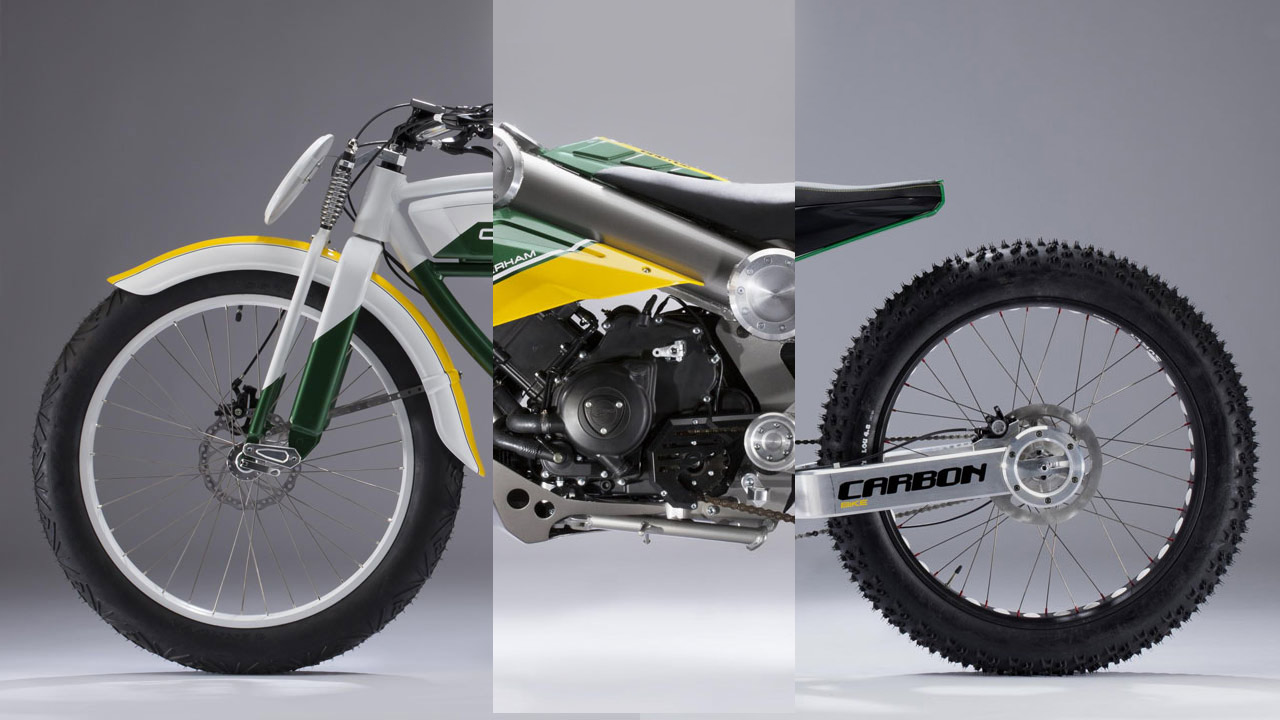 The launch of Caterham Bikes is a natural extension to the expanding Caterham Group since the purchase of the historic Caterham Cars brand in April 2011 by Tony Fernandes and Dato' Kamarudin Meranun.

The Brutus 750 (dubbed the 'SUV of motorcycles'), Classic E-Bike (an all-electric bike with retro styling) and Carbon E-Bike (a premium bike with close ties to F1 through its use of composite materials) - were unveiled at EICMA 2013 and will be launched throughout 2014 as part of the Group's strategy of growth through intelligent partnerships.

More new models will be announced next year as they strive to expand this exciting new arm of the Caterham business. The Brutus 750 offers performance and assured handling, as well as the exciting ability to be all things to all riders - along with a slice of Caterham DNA, where excitement is just a twist of the throttle away.

With its ability to be an on-road bike, an off-road machine or even a snowmobile, the Brutus delivers the ultimate in flexibility and riding simplicity thanks to a 750cc single-cylinder engine that delivers its power through an automatic gearbox. This machine provides all the thrills of a motorcycle but with the simplicity of a twist-and-go scooter.

So don't let the raw, excitingly aggressive lines of the Brutus fool you. This is an ergonomically practical motorcycle, giving the rider comfort, while the chassis and powertrain - as well as that automatic transmission - means that this isn't a motorcycle whose performance can only be enjoyed by experienced riders. This is a machine on which ease-of-use means all the performance and enjoyment is accessible to both novice and seasoned riders alike. The style itself comes from those classic lines. The golden age of British motorcycling is considered to be the 1920s through to the early 1960s and it's the first part of the 20th Century that inspires the look of the Classic E-Bike. Think back to those vintage times, a time when British motorcycles were the finest in the world. They had simple, elegant lines, curves filled with classic British racing colours detailed with pinstriping. The times were simpler and more carefree.

The Classic E-Bike gives you that traditional look, but with advanced materials used in its construction and a modern electric powerplant giving a range of 25-50 miles (40-80km) and the added freedom that, in the EU, the rider does not need to have a motorcycle licence.

Designer Alessandro Tartarini calls this a 'fusion vehicle', in which old and new are brought together in the 'future of tradition.' This is a design in which classic styling and traditional materials meet modern design and materials. The Classic E-Bike is powered by an emission-free motor and is part bicycle, part motorcycle but comes together as one, unique whole which can provide elegant, effort-free transport.

The beautiful lines of the Caterham Classic E-Bike do not sacrifice functionality. With the E-Bike consisting of an aluminium frame, the leather handle-bar grips are fixed to a traditional springer front fork, which also carries a modern front disc brake. The Shimano 3-speed hub gears give brisk acceleration and the centrally-mounted engine - designed to look like a classic V-twin layout - houses the 250 Watt motor.

The large 'fuel' tank doubles as a useful luggage space, in which the rider can stow personal items, or the battery charger for the 36 Volt battery pack. The wide seat is adjustable to three positions and provides comfort as do the large tyres: the size of which ensure a compliant ride over any road surface.

With its unique blend of vintage and modern, the Caterham Classic E-Bike is an elegant solution to modern transport woes. Inspiration and materials from Caterham's exciting Formula One project have found their home in a radical machine which excites on levels of style, design and character. This exotic combination and the use of advanced techniques, allied with the creativity of Alessandro Tartarini has combined with Caterham's unique DNA to lead to the creation of an electric vehicle with a bold, futuristic look, but one with adaptable ergonomics and safety to the fore.

At the heart of the Carbon E-Bike is a 36-Volt, 250 Watt brushless motor, feeding its power through an eight-speed Shimano Nexus gear hub, with every gear ratio tuned for optimum acceleration.

The chassis is a work of art: featuring a Modular carbon-aluminium frame, in which three different frame sizes and flexible ergonomics technology means that the Caterham Carbon E-Bike will be uniquely adaptable to the size and shape of each rider. Carbon girder forks will keep the front-wheel where it needs to be - tracking true - while the mono-shocked rear-end ensures efficient delivery of the power to the Tarmac while all the time giving a compliant, plush ride.

Continuing the hi-tech theme, the LED dashboard will supply all the information the rider needs, with battery status display, speedometer, trip meter and battery range indicator. The wheels used on the Carbon E-Bike feature lightweight but strong aluminium rims, laced with stainless steel spokes. Attached to the wheels, the braking system is similarly robust, featuring modern disc brakes front and rear. Tyres will also be performance-based, with wide, fat tyres, impregnated with carbon-fibre for strength and integrity.

The result is a stunningly modern motorcycle with zero emissions but with a full fun quota as standard and with Caterham's performance-based DNA coursing through its veins.