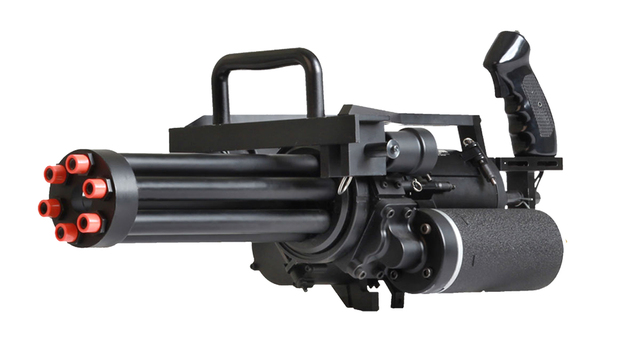 The M134 is the ultimate in the world of Airsoft the M134 has 6 barrels that fire independently to rain a shower of BB's on your opponents. The M134 comes with TWO different sets of barrels the first being 35 Inches long and the second 27 inches long. If you are looking for the ultimate in Airsoft combat weapons then the Echo1 M134 MiniGun is perfect for you.

The minigun is a multi-barrel machine gun with a high rate of fire (several thousand rounds per minute), employing Gatling-style rotating barrels and an external power source. In popular culture, the term "minigun" has come to refer to any externally-powered Gatling gun of rifle caliber, though the term is sometimes used to refer to guns of similar rates of fire and configuration, regardless of power source and caliber. Specifically, minigun refers to a single weapon, originally produced by General Electric. The "mini" of the name is in comparison to designs that use a similar firing mechanism but 20 mm or larger shells, such as General Electric's earlier M61 Vulcan.