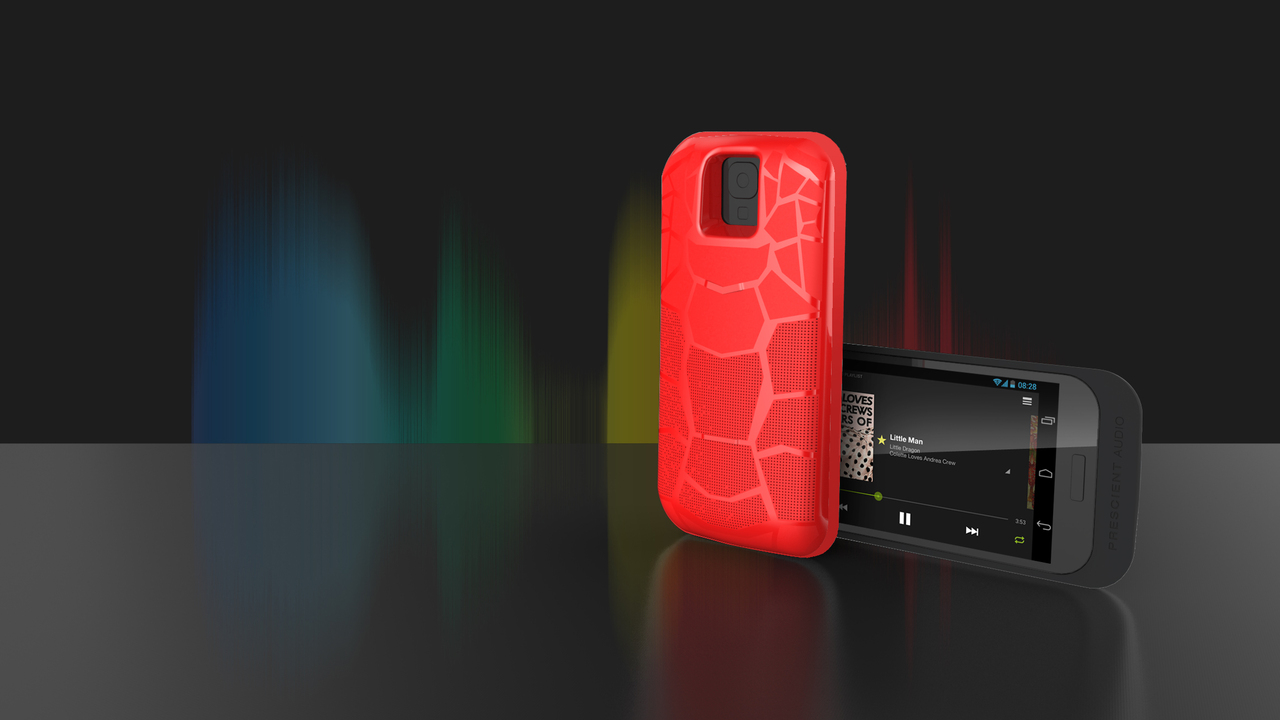 Play Music on the Go With the Prescient AudioCase

Up until now, if you wanted better or louder sound from your smartphone, you'd have to bring along a separate speaker device or settle for cheap amplifying attachments that do nothing to deliver better sound quality.

The Prescient AudioCase solved that problem with an integrated case for iPhone 5/5s and Samsung Galaxy S4 which employs the CES Innovation Award-winning Thin Driver Technology inside a robust streamlined case to deliver the best audio possible.

ThinDriver Technology
It began with Prescient’s first product: the amazing ThinDriver TD-12, a super-thin 12 inch subwoofer, the most radical loudspeaker design in 90 years. The high-performance, 1000 Watt loudspeaker boasts a brilliant re-positioning of the components from behind the loudspeaker to its perimeter frame, resulting in a mounting depth of 2.25”, the shallowest available and an incredibly light weight of only 8 Lbs, delivering amazing audio depth and clarity. A typical 1000 Watt driver is 10" deep and weighs 40 Lbs!

The Mini ThinDriver will be integrated into the Prescient AudioCase, the first of its kind, delivering mind-blowing sound quality and volume.

Audio Quality
Mini ThinDriver Technology is designed to deliver enhanced audio and the full frequencies of the human voice that are missing from current portable electronic device audio speakers.

A voice frequency or voice band is one of the frequencies, within part of the audio range, that is used for the transmission of speech. In telephony, the usable voice frequency band ranges form approximately 300 Hz to 3400 Hz. Typically smartphones only play frequencies above 700 Hz. The voiced speech of a typical adult male will have a base frequency of 85 to 180 Hz, and a typical adult female from 165 to 255 Hz. A typical child ranges from 255 Hz to 500 Hz. Thus, the fundamental frequency of most speech falls below the bottom of the "voice frequency" band and dwells below typical smartphone speakers. However, enough of the harmonic series will be represent from the missing fundamental to create the impression of hearing the fundamental tone.

In other words you have never heard the real voices of family, friends, or others on a smartphone - but you can on the Prescient AudioCase. And, everything else will sound infinitely better, too.

The Prescient AudioCase is as simple to attach to your iPhone 5/5s or Samsung Galaxy S4 as any case. Pull the two pieces apart, slide in your phone and re-attach the top piece. The case automatically connects to the iPhone 5/5s Lightening Connector or the Samsung Galaxy s4’s USB Connector. (A USB / micro USB cable will be provided with each AudioCase.)

Once engaged into the audio device it is considered docked.

The Prescient AudioCase also features its own battery power to extend the life of your phone and speaker combination. You can get up to 6 hours of loud, clear sound.