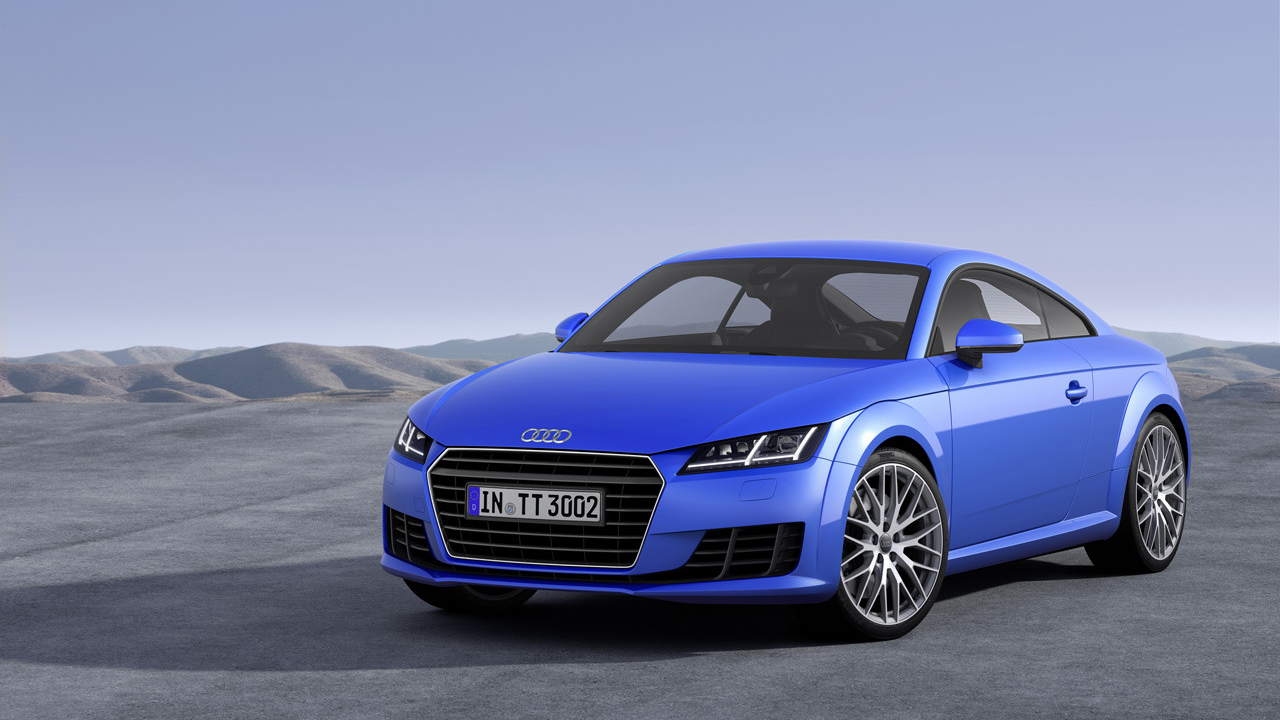 When the first-generation Audi TT came on the market in 1998 it was a design revolution – its strictly geometrical, formally coherent design language made it an icon with huge charisma. For the third TT generation, the Audi designers have returned to many of these ideas and placed them in a new context that is as dynamic as it is diverse.

The front of the new TT is dominated by horizontal lines. The Singleframe grille is much broader and flatter than that of the previous model, with a powerful line dividing it into two zones. Starting in the top corners of the grille, sharp contours run in a V across the hood, which bears the four Audi rings – as on the Audi R8 high-performance sports car (combined fuel consumption in l/100 km: 14.9 – 12.4 (15.79 – 18.97 US mpg); combined CO2 emissions in g/km: 349 – 289 (561.66 – 465.10 g/mile). The air intakes feature struts that direct part of the flow away from the front to the flanks.

The flat headlights give the new TT's face a determined look. Xenon plus units are standard, and Audi can optionally provide LED headlights or ones in pioneering Audi Matrix LED technology, where the high beam is generated by controllable individual LEDs. The Matrix LED headlights consist of 12 LEDs and include another Audi innovation: dynamic turn signals that light up sequentially in the direction in which the driver is steering. The predictive cornering light uses navigation data to move the cone of light into the curve before the steering wheel is turned.

The third generation of the compact sports car is again captivating, with its emotional design and dynamic qualities. The new Coupé is characterized by the use of innovative technologies in its engine and in its control and display concept, including the Audi virtual cockpit.

"The Audi TT is the epitome of an authentic design icon and a top-performance driving machine," explains Prof. Dr. Ulrich Hackenberg, Member of the Board of Management of AUDI AG for Technical Development. "With the new generation, we are making this technology even easier for the driver to experience – just as they would expect from a real sports car."