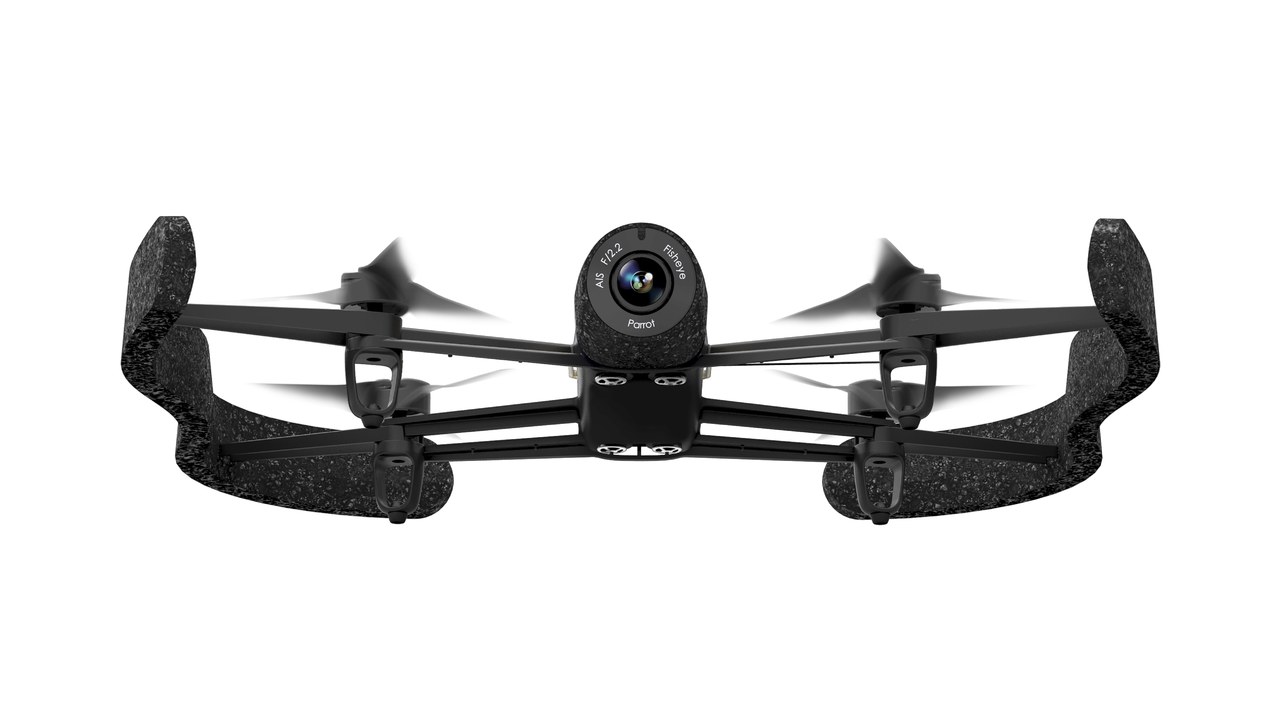 With Bebop Drone, Parrot demonstrates its technological expertise and confirms its commitment to the civil drone market. The Bebop Drone is a super-high-tech leisure quadricopter with features of a professional one. Equipped with a 14 mega pixels fish-eye camera, the Parrot Bebop Drone takes video and pictures of the world in a 180-degree field with remarkable image quality. Endowed with a fully digital technology of image stabilization, the Bebop Drone captures video despite the movements inherent in aerial footage.

The combination of numerous sensors gives it impressive stability and great maneuverability when piloting with a smartphone or a tablet. The use of the latest Wi-Fi 802.11ac MIMO and of four ceramic antennas 2.4GHz and 5GHz ensures an unequalled reach. For extreme sensations, the Parrot Bebop Drone can be piloted with an optional controller compatible with FPV glasses. Parrot extends its range of leisure drones with the Bebop Drone that takes professional-quality images. Built With Safety in Mind
Its feather-weight ABS reinforced structure makes Parrot Bebop Drone robust and safe. In case of shock, propellers stop automatically. Emergency mode enables you to have the drone immediately landing. Thanks to GPS, a Return Home function brings the Bebop drone easily back to its take-off point. Finally, EPP hulls included in the pack makes indoor flights safer.

3 years of Research & Development
About 50 engineers, specializing in digital signal processing, aeronautics, Wi-Fi radio and industrial design, worked on the development of the Parrot Bebop Drone, a super-high-tech leisure quadricopter with features of a professional one ! A Featherweight of High Technologies
Parrot Bebop Drone delivers the best performances without sacrificing battery life: 8x times more powerful than Parrot AR.Drone 2.0 onboard computer, Bebop Drone navigation computer features a Parrot P7 dual-core CPU, quad-core GPU and 8 GB of Flash Memory. All are fixed on a magnesium shelf that acts as electromagnetics shielding and as a radiator. Runs on Linux with SDK available for Developers.

An Astounding Stability
To guarantee an optimal stability of the quadricopter, without compromise on its maneuverability, the Bebop Drone does a fusion of data coming from numerous sensors: 3-axes accelerometer, gyroscope, magnetometer. 1 ultrasound with a reach up to 8 meters, 1 pressure sensor and a vertical camera to track the speed.

Parrot Bebop Drone Creates its Own Wi-Fi Hotspot
MIMO Wi-Fi connection : The Parrot Bebop Drone generates the lastest Wi-Fi ac 802.11n network up to 300 meters range with 2.4 and 5 Ghz antennas. Depending on the network interference, you can select the frequency of your choice.

Full HD 1080p Video with Smart 3-Axes Stabilization
Thanks to algorithms developed by Parrot engineers, the bebop Drone benefits from an exclusive 3-axes image stabilization system that maintains fixed the angle of the view, whatever the inclination of the drone and its movements caused by wind turbulence.

User-Controlled 180° Vision
Control the angle of the camera with only a movement of your thumb, directly from the piloting application.