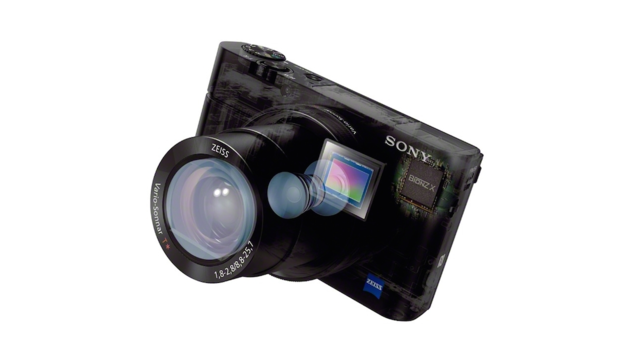 Building on its lineup of acclaimed compact cameras, Sony Electronics has introduced a new addition to its popular Cyber-shot RX series – the pocket-sized RX100 III camera.

“Sony continues to push the modern limits of engineering and innovation with our Cyber-shot RX family of products” said Patrick Huang, director of the Cyber-shot business at Sony Electronics. “With the new RX100 III model, we’ve added a brighter, wider aperture lens and an impressive retractable OLED EVF, while also utilizing the latest Sony imaging technologies to boost the camera’s processing speed and efficiency. And we’ve done this without sacrificing any of the true ‘pocketability’ of our RX100 line, creating an especially unique compact camera unlike anything else in market today.” The unique new ZEISS lens on the RX100 III camera covers the popular 24 -70mm1 focal length with a wide F1.8 – F2.8 aperture. This is particularly noteworthy at the 70mm telephoto end of the lens, where the maximum F2.8 aperture allows it to gather about twice as much light as the RX100 and RX100 II models (at 70mm), ensuring that portrait subjects can be captured against beautiful background defocus. The wide aperture also allows the lens to capture moving subjects clearly without any blur due to camera and/or subject shake.

The versatile new lens is capable of capturing dramatic landscapes or large group photos at the wide 24mm length while also boasting impressive macro shooting capabilities throughout the focal range. For example, it can still focus accurately as close as 30cm from the front of the lens (working distance) when fully extended. There’s also a built-in 3-stop (1/8) neutral density filter that adds to shooting flexibility in a wide range of outdoor conditions.

The new ZEISS lens realizes outstanding corner-to-corner sharpness, with nine total aspherical glass elements including two advanced aspherical elements that have been cemented together – a world’s first in lens manufaturing2. This results in an ultra-compact physical footprint while maintaining a wide maximum angle of view. Additionally, the 24-70mm lens1 features ZEISS T coating that minimizes flare and ghosting and a seven-blade circular aperture that enhances ‘bokeh’ background defocus.