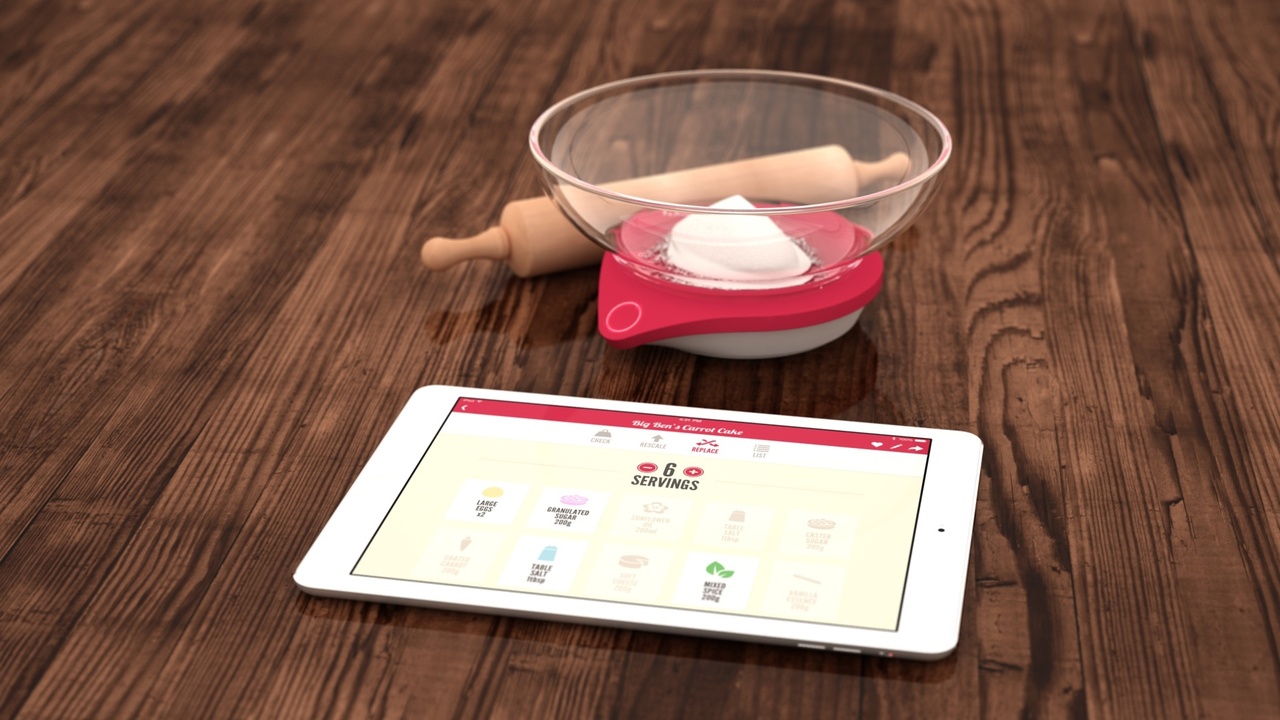 Drop, an app and iPad-connected kitchen scale that improves the skills of home bakers, has launched its pre-order campaign at getdrop.co. The Drop connected kitchen scale is the first in a series of kitchen products that Drop plans to tie into its new recipe platform. Recipes have existed in their current format for close to a thousand years: a list of ingredients, a method and often an image/illustration. Even digital recipe sites have no “smarts” – publishers don’t know whether recipes have been made, or where along the way errors may have happened, and increasing or reducing quantities means doing complicated math. Drop aims to change all that with its smart baking assistant.

“There are over 30 million bakers in the U.S. alone and for many of them, finding and following a recipe is a frustrating process that can often lead to unpredictable results,” said Ben Harris, co-founder and CEO, Drop. “Drop is here to clean up that mess. Our sleek, precise kitchen scale has been designed from the ground-up to work seamlessly with the tablets that people already own and use in their kitchens. Our vision is for baking to be a joyful experience that brings people together over delicious food,” said Harris.

How it Works
The app will feature beautifully photographed, proven recipes that will lead bakers through each step of the process, offering tips, tricks and handy features like rescaling quantities and proposing substitute ingredients. After placing a bowl on the scale, drop in an ingredient and the app will automatically know once enough has been added and move to the next step in the process. There’s no need to touch the screen with floury hands. In instances where it may be necessary to tap the screen, the scale features a capacitive button that can page through the app. Why a Scale First?
Today, many home bakers still use cups and spoons to measure their ingredients by volume, not weight, which inevitably adds a lot of variables to the science of baking and impacts results. How quickly you scoop up the flour will impact how much air is added; how much you pack an ingredient into the cup, or even the air temperature itself, will affect the amount measured.

“In my opinion, cups are for bra sizes,” says Lauren Godfrey, Drop’s team baker. “Measuring by weight is the only way to go if you want to bake with consistency and achieve the results you’re looking for,” she says.

The Drop connected kitchen scale, which won best consumer hardware device at Launch Festival in San Francisco earlier this year, will be priced at $99. Customers placing a pre-order for the scale, which will be shipped this fall, will have access to a limited introductory price of $80. Free shipping is also available to the first 2,000 orders placed.