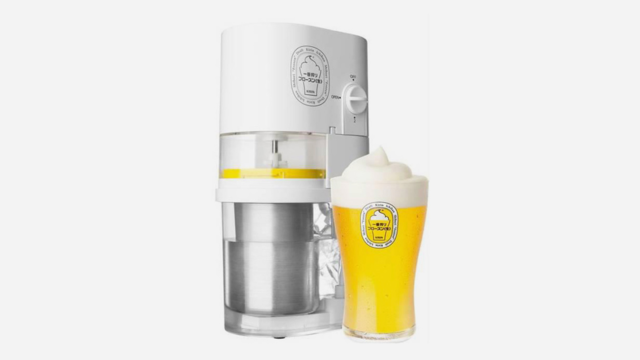 Get a cold cap on your beer and enhance your thirst-quenching drinking experience with the Frozen Beer Slushie Maker by Kirin Ichiban. Created by Kirin, one of Japan's top drink manufacturers, this is part of a big recent trend in "cold" or even "super cold" beers in Japan. These "frozen beer" slushies were a huge hit for Kirin when it opened special beer gardens serving them in Tokyo in 2012.

Kirin developed patented freezing technology for its special slushie makers that add a whipped and frozen top to the beer. And now you can get the same taste at home! Produced with Takara Tomy Arts, this small household version of the machine was originally used by Kirin as a promotional item for its Kirin Ichiban beer summer campaign. It proved so popular that they have been manufacturing it permanently ever since! We can see why. The ice cap insulates the liquid and keeps it cooler for much longer. Plus it tastes even more refreshing too.