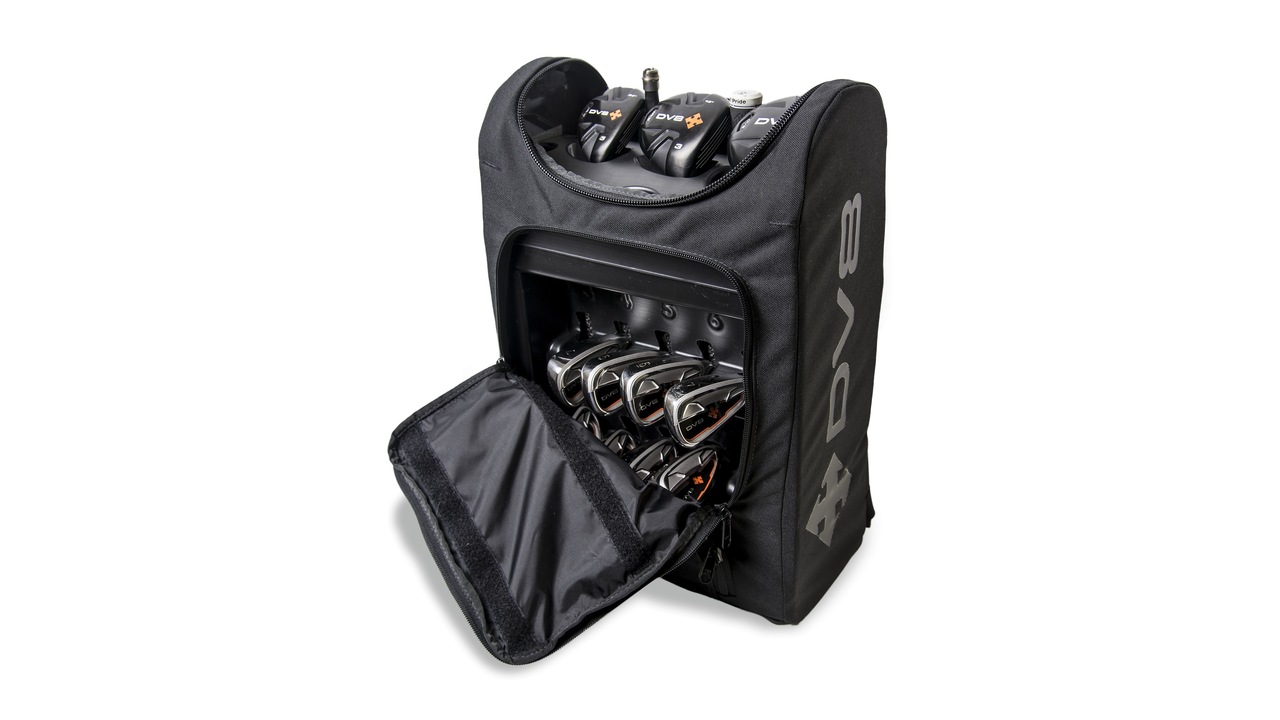 DV8 Sports, a new company committed to growing participation and enjoyment of golf, has recently announced a Kickstarter campaign to help fund the launch of its patented, portable golf equipment and bag design. The 35-day campaign seeks funding to fuel DV8 Sports' first production run and a broader market launch later this year.

DV8 clubs liberate users from heavy, tough-to-transport clubs and bags. Instead of muscling 40-plus pounds of equipment around (or struggling to find storage at home or on the go), DV8 users get a regulation set of clubs and portable backpack style bag, all weighing less than 15 pounds. DV8 clubs will come in three different shaft flexes: stiff, regular and ladies/senior.

The secret to golf without obstacles is DV8's patented coupler technology, which allows club heads to be interchanged on one or two custom shafts. The set is carried in a stylish, super durable backpack with club head changes taking less than 3 seconds with no tools or torque wrenches required. The entire system is roughly one-third the weight and one quarter the size of a traditional set. The DV8 bag also features a tablet compartment enabling users to film their swing or practice while watching downloaded instructional videos. "DV8 clubs are designed to complement, not complicate your lifestyle," said Richard Stamper, president and CEO, DV8 Sports. "Our goal is simple—through innovative out of the box equipment designs, put fun back into the game by helping more people enjoy golf, regardless of where they live or how they travel. Golf is a great way to appreciate the outdoors, and the thrill of being on a scenic course or practicing at the range with friends should never be hindered by limited living and storage space or transportation constraints."

Thanks to its unparalleled portability and affordability, a fully-stocked DV8 Sports set opens the game up to on-the-go people who don't want to sacrifice their lifestyle. It's the ideal choice for motorcyclists and sports car enthusiasts as well as apartment dwellers, frequent travelers and new players just picking up the game.

The idea for DV8 was sparked in 2009 when founder and inventor Pat Brady witnessed an airport altercation between four travelers, their golf bags, briefcases, luggage and a taxi. Inspired by that experience, Brady began development of an innovative club design that would travel smaller while delivering similar performance to traditional clubs. Five years of development resulted in the patented, stainless steel DV8 coupler which connects up to 14 titanium and stainless steel club heads to a choice of two shafts in under three seconds. In terms of performance, the clubs have been subjected to extensive durability and player testing and compared to three of golf's leading brands at Golf Labs, an independent golf test facility in San Diego. In those tests, DV8 clubs performed exceptionally well, showing no statistically significant performance difference from traditional clubs.

DV8 Sports Kickstarter campaign supporters will be rewarded with a number of one-of-a-kind incentives, from embroidered bag customization and deep discounts on pre-orders to an autographed set from top PGA Tour instructor Rick Smith.