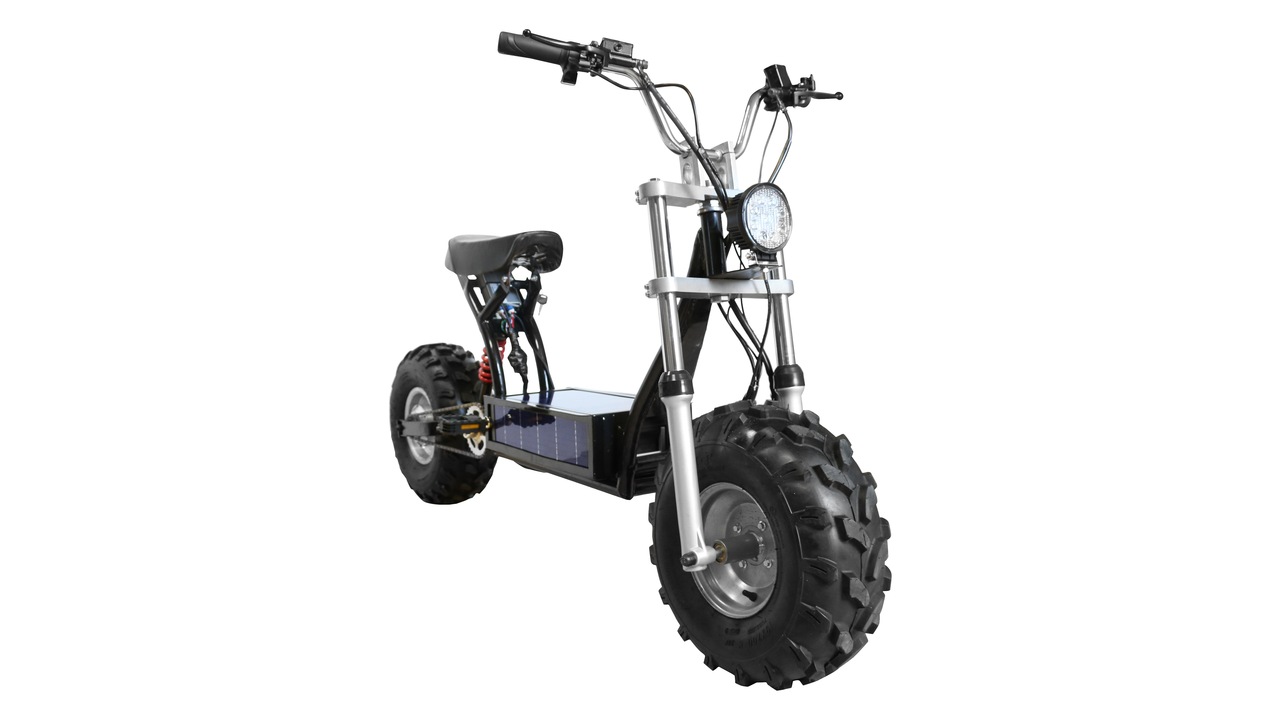 Daymak has officially launched a Kickstarter campaign to help fund their new invention, The Beast off-road, on road self charging solar eBike. Daymak's Beast is an all-new off-road eBike, completely designed and created in Canada. The Beast is also street-legal, allowing riders to enjoy it on the trails, in the woods, on a farm, camping, on a mining camp, on rough terrain, or in the city. Main features include a Daymak solar panel and an enclosed battery pack that recharges continuously.

"The Beast is part scooter, part dirt bike, but it's actually a bicycle! and 100% fun! 100% green! and street legal. That's right you can take it on the road with no insurance or license in most of the civilized world!" states Aldo Baiocchi Founder/CTO of Daymak Inc.

“The Beast is perfect for the trails or the road. Imagine going quietly in the woods or going off on dirt roads, and then going straight on to legal roads. You can go camping, use it on a farm, a mining camp site, on a dirt road. This Beast can do it all,” said Daymak CTO, Aldo Baiocchi. “The Beast has been a couple of years in development and it’s built to roar! We want the rider to have a comfortable, powerful ride whether it’s on or off-road. There isn’t anything else built to take it the way The Beast can.” Fully electric, the Beast can go as fast as 32km/h (20mph) with up to 45 km (25 miles) range. It is quiet, economical, good for the environment, and can take the rider anywhere they want to go. The enclosed solar panel battery case gives 5 distinctive advantages. First, the battery is always trickle charging thus avoiding the number one failure of all ebikes which is battery failure from not being charged for long periods of time. Second, the solar panel yields about 10 km / 6 miles range per 10 hours of any day light. If the rider does not ride more than 40 km/25 miles a week he never has to plug it in to charge the battery. Third, lower cost of charging, fourth, less carbon foot print, and finally, the removable battery pack can be used as a back up generator since it comes with 2 USB plugs.

"The Beast is the #1 greenest ebike on the market today!" states Daniel Cargnello press manager at Daymak. "Not only are we reducing CO2 emissions but we are also using much less electricity. 90% of ebike riders only do 10 km/7 miles per day on average, meaning the Beast, for them, will never have to be plugged in and no expensive electricity will be used! The Beast will come with a charger in case you do need to charge even faster."

Daymak is launching the Beast on Kickstarter at special pledge pricing depending on various configurations. Daymak will offer its backers worldwide shipping options. Several stretch goals have been set from higher quality components such us Samsung Lithium batteries to the smartphone app for the Beast that will give the rider features such us speedometer, odometer, GPS, voltage meter and much more!

The Daymak Beast campaign launched on July 1 and will run for 30 days. Funding on Kickstarter is all-or-nothing. The Beast must meet its goal of $99,000 by July 31 or it will not receive any funding.