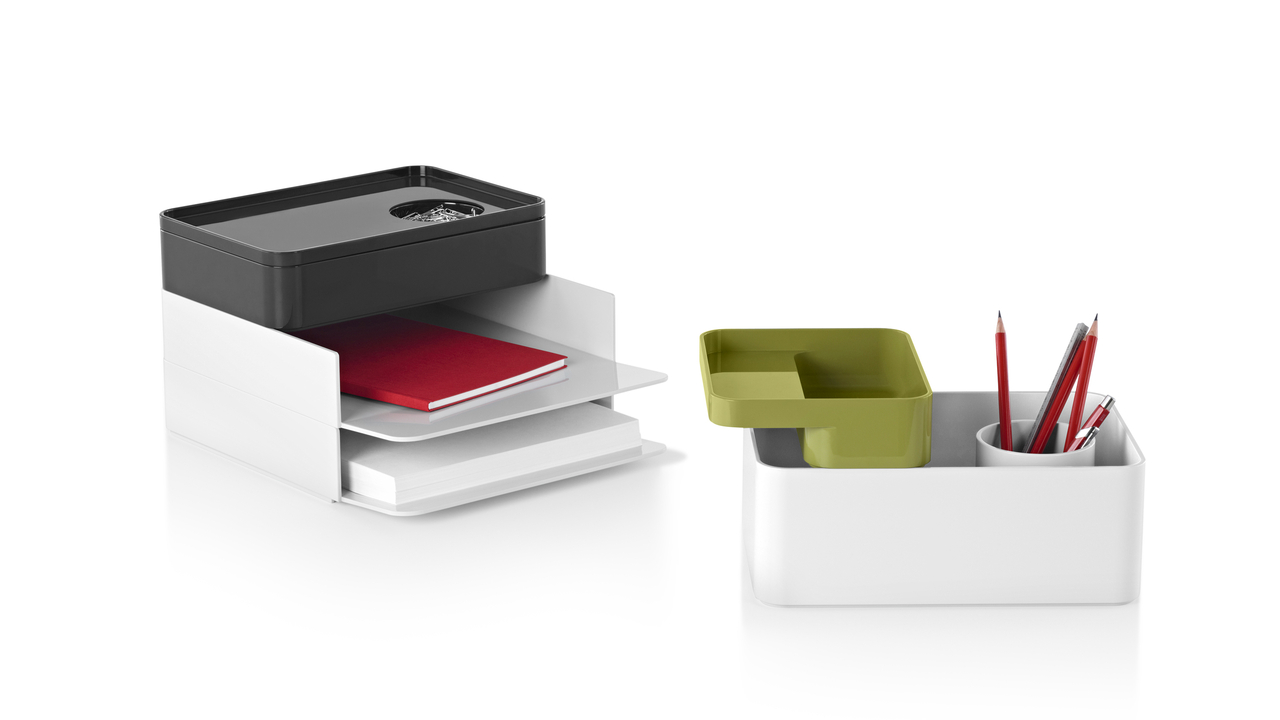 Sam Hecht and Kim Colin recently designed the Formwork desk accessories for Herman Miller's Objects program to help create a sense of place for the various small things kept in the home as well as the workspace. Intuitive and versatile, this modular system of containers may be arranged, stacked, and combined to best organize tools and accessories-from the size of the item to how frequently it's used. The design also embraces an acceptance of the mixture of a digital and an analog world, with containers suited both for high-tech gadgets as well as for items like pencils and paper clips.

The designers of Formwork, Hecht and Colin, approached the design by examining the products that populate our daily lives. For example, in their designs for the line's small and large trays, they gave each a cantilevered ledge to allow the placement of items in order of usefulness. This gives people ready access to some things while allowing other things to stay in the background. For the large and small boxes, which are designed for bulkier items, the designers added removable lids and holes that may act as cup holders. And finally, for the media stand, the design is cleverly angled on a silicon base ensuring that a gadget will stand firmly in place no matter how vigorously it is used. Pencil Cup
As their book The Usefulness of Small Things attests, Hecht and Colin take great pleasure in everyday items, and few items are more everyday than the lowly pencil. In providing a place for these analog writing instruments, the designers thoughtfully included a ledge for smaller items too, some certainly digital, such as a memory stick. Tray, Large and Small
Hecht and Colin approached the design of Formwork by examining the items that populate our lives and our desks. In their design for the line’s small and large trays, they gave each a cantilevered ledge to allow the placement of items in
order of usefulness—giving you ready access to some things and letting you place others in the background. Box, Large and Small
To account for the bulkier items that inevitably occupy surfaces at home and in the office, Hecht and Colin created boxes with removable lids. Each lid has a hole that accepts a removable cup. Or, the cup can be set in an indentation inside the box and under the hole for access to the cup’s contents without having to remove the lid. Tissue Box
Hecht and Colin’s pragmatic design for a Tissue Box ensures that Formwork meets all the requirements of the modern desk, which in their estimation is “an amalgamation of not just the office, but also the kitchen, the workshop, and the bathroom.” Media Stand
As digital tools such as tablets and notebooks become ubiquitous, Hecht and Colin saw the need for convenient places to store them, and for a thoughtfully angled surface on which to use them. The Media Stand’s stabilizing silicone base ensures that your gadget stays put even with vigorous use of a touch screen. Paper Tray
With so much emphasis on the digital, it is surprising how much paper still clutters desktops, kitchen counters, and workshops. Acknowledging that paper will always be with us, Hecht and Colin created Paper Trays that stand alone,
and stack with other trays or Formwork elements. A gently sloped lip makes picking up the pieces easy.