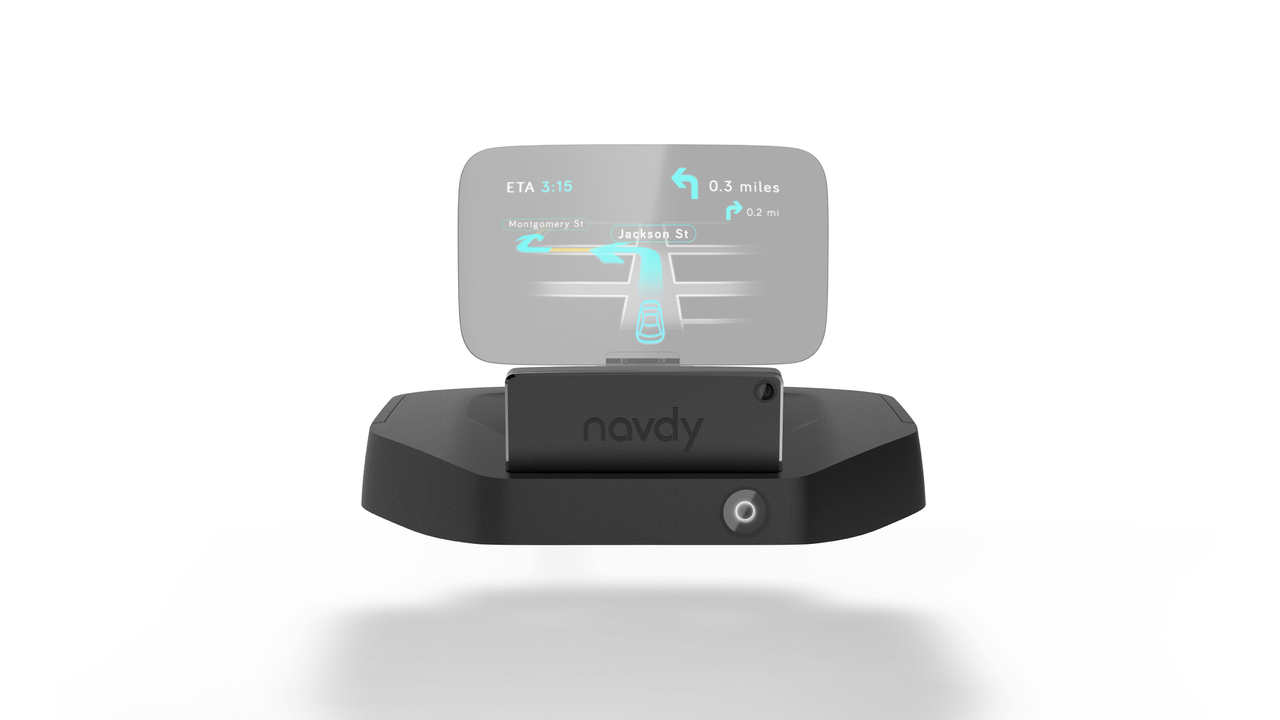 Navdy has announced a breakthrough Head-Up Display (HUD) aftermarket car console that allows drivers to access their smartphone’s apps while keeping their eyes on the road. Navdy combines a high quality projection display with voice and gesture controls to create a safer, highly intuitive driving experience. Combining advanced display technology with touch-less controls means drivers no longer need to fumble around with their phone to navigate, communicate or control their music.

Drivers are three times more likely to get into an accident when they take their eyes off the road to look down at a touchscreen. Built-in consoles like Android Auto and Apple Carplay are just bigger touchscreens that do nothing to solve the problem. “Smartphones were never designed to be used while driving.” said Navdy co-founder and CEO Doug Simpson. “Touch-based apps clearly force you to take your eyes off the road. So we started by completely rethinking what the experience of using apps behind the wheel should feel like. Navdy is built from the ground up to be the safest and most intuitive way to make calls, use navigation, listen to music or access notifications without ever looking away from the road.”

Navdy is the world’s first in-car platform that offers:

Breakthrough display technology: Projects a bright transparent image directly within your field of vision that appears to float six feet in front of your windshield, allowing you to keep your eyes on the road while simultaneously seeing navigation instructions or incoming phone calls. The device comes with advanced dimming and stabilization controls, to optimize usability in any driving conditions.

Car-tailored Interface: When your smartphone apps appear on Navdy they are purposely simplified to show you only what you need, when you need it, and minimize distractions. Your navigation will not disappear when a call comes in; Navdy will display both notifications and navigation at the same time in a split screen. Visual elements such as image complexity, placement, or font size, are consistent across apps to make the user experience pleasant and predictable.

Works in any car: The device mounts on a flexible footer that fits on practically any car dashboard, and is powered by plugging in to the onboard computer (OBD II port), available in all cars produced since 1996. This makes the only required cord less intrusive, while providing car status information to the Navdy processor.

With all the Apps you need: Navdy works with popular navigation apps like Google Maps to display turn-by-turn directions; it controls your music apps like Spotify, Pandora, or Google Music; it reads or displays notifications from text messages or social media apps, fully controlled by its Parental Control settings; and it displays car alerts such as true-speed, miles-to-empty, or battery-voltage from its access to the car’s computer.

Portable and compatible: Navdy works with iPhone (iOS 7+) and Android (4.3+) smartphones, and can move easily to another car or another smartphone. Once a Navdy has been paired over bluetooth for the first time, it can share data with your phone over wifi. Navdy does not require it’s own data subscription service. Initial device dashboard placement takes 60-90 seconds. Slightly longer if you read instructions.

Navdy is available for pre-order for 30 days at the introductory price of $299, at 40% discount from its projected retail price of $499.