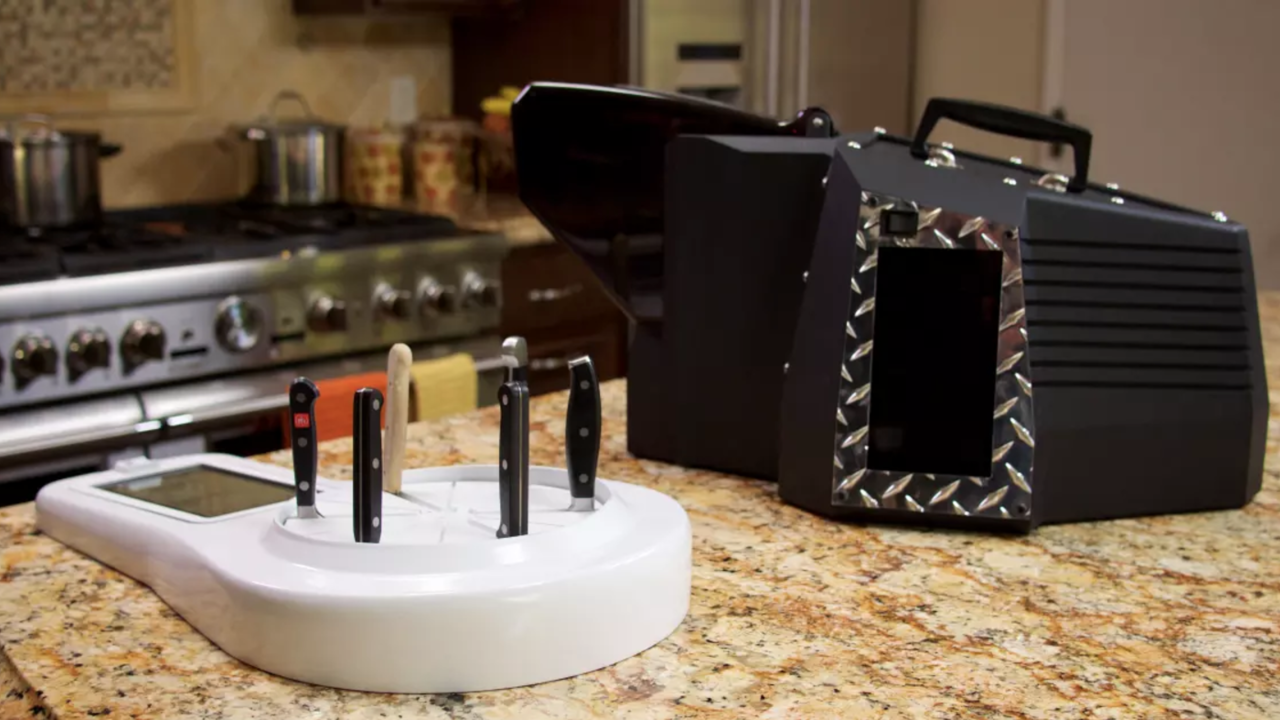 "No more dull blades" is the promise of Knife Robot, a 100% automatic knife sharpener that's on track to become a must-have item for pro and amateur chefs, backyard BBQ fans and hunting knife enthusiasts. The creators of Knife Robot launched an Indiegogo campaign to support its production and blew past their funding goal in a matter of days.

"Knife Robot is the world's first portable, automatic knife sharpener," says Founder and CEO Jim Kolchin. "Finally, consumers won't have to guess about how long to sharpen their knives, because Knife Robot is not only automatic, but also smart enough to achieve a perfect edge every time."

Here's how Knife Robot works: Insert a dull knife, walk away, return five minutes later and retrieve the sharpened knife. Belt angle, speed and pressure are all customizable. Knife Robot features a built-in microscopic camera that it uses to detect the "burr" — a telltale sign that a knife has reached optimal sharpness. Plus, there's enough room inside the machine to store an entire knife collection.

Knife Robot accommodates blades between 2" and 10" inches long, not including the handle. Maximum width is 4" and maximum thickness is 3/8". Knife Robot works just as well with serrated blades, like those on steak or utility knives. Sharpening belts last though 100 uses, and replacements can be purchased on Amazon for about $1.

Typically, people have relied on honing steel for sharpening blades, but ordinary honing steel only straightens a worn edge; it doesn't make the blade sharper. And depending on the design, using honing steel risks injury and takes a bit of elbow grease. Meanwhile, traditional electric sharpeners are notoriously noisy. Knife Robot solves all these issues.

Precision sharpening is an art form practiced by professionals, which makes Knife Robot a truly professional machine. Even famed knife maker Ed Schempp has weighed in on Knife Robot's quality craftsmanship: "I used the machine. It is real."

With 21 days left, the Knife Robot Indiegogo campaign has reached $64,058 and 320% of its funding goal. The first orders of Knife Robot are scheduled to ship out in October. Meanwhile, the Knife Robot team will soon be announcing a partnership with a respected and well-known knife sharpener manufacturer.

Abraham Lincoln once remarked, "Give me six hours to chop down a tree, and I will spend the first four sharpening the axe." With Knife Robot, however, achieving razor sharpness is effortless and takes only minutes.