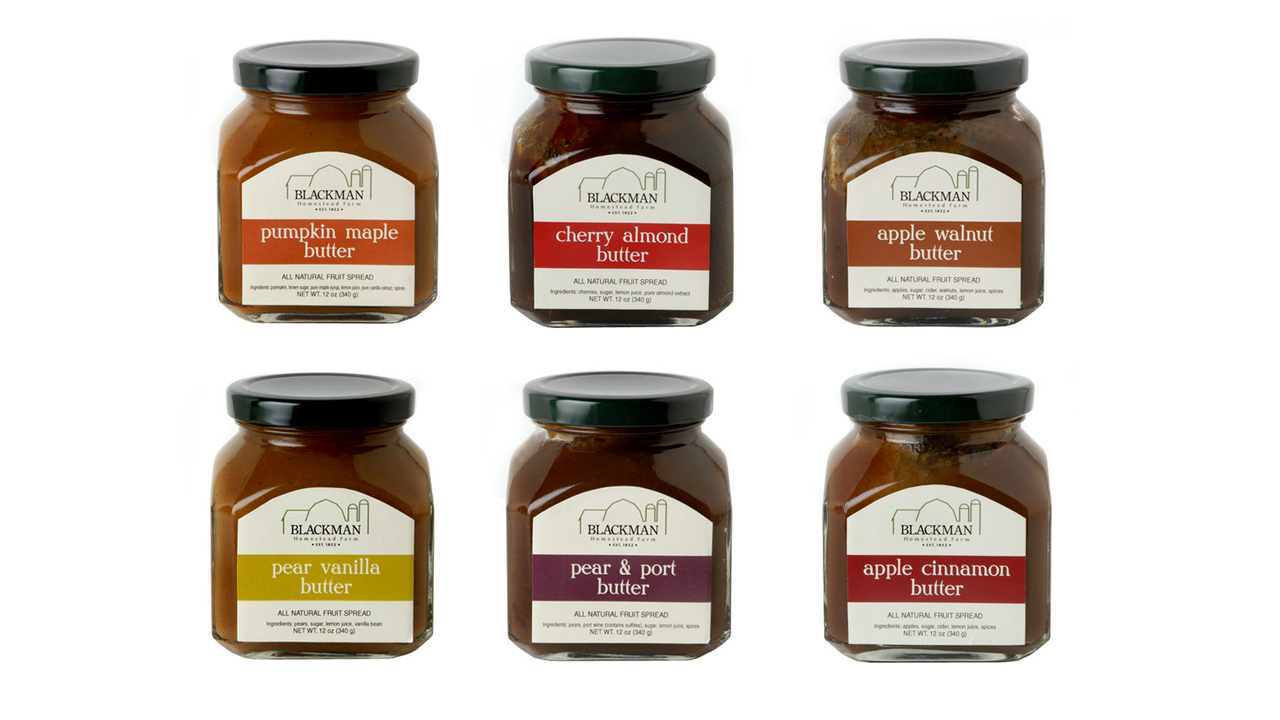 Nestled on the picturesque Niagara Escarpment in Western New York, the Blackman Homestead Farm produces delicious all-natural fruit butters made by blending home and locally grown fruit with unique high quality ingredients. These versatile combinations are great on toast, paired with cheeses, as sides with meat, or as dessert toppings.

In 1852, George Blackman and his family traveled from Connecticut via the Erie Barge Canal and settled in Western New York. The 160-acre homestead, located on the Niagara Escarpment in the Town of Cambria, was originally purchased from the Holland Land Company. The land was insightfully chosen for its continuously running spring fed stream, natural hillside drainage, and weather protection from the escarpment. This proved to be an excellent location to grow the original Baldwin and Greening apple orchards, as well as raise cattle. With four sons, the farm continued to prosper until the Civil War when all of George's sons left to serve. Son Isaac returned and took over the farm in 1866.

In 1904 Isaac's son, Walter Sr., began managing the homestead. Many of the original barns were moved from across the road to their current locations and additions were built to better suit an expanding dairy operation. Pears, apples, and grapes were planted on the hillside. Selling churned butter and fresh produce in nearby Lockport, New York became their main source of income. In 1940, Walter Jr. began modernizing the dairy and fruit farm balancing new technology with small family farm virtues.

Today Walter's son, Robert, and his wife Margaret own the farm. In 1971 they started the U-Pick apple business allowing customers to visit the farm and pick their own fruit. Heirloom apple trees and 100 year-old pear orchards and Concord grape vineyards continue to produce the fruit sold today. In 1985, Robert sold the Holstein dairy herd and focused on farm-to-table retail products. Today, daughter Julie has created a specialty fruit product line using their homegrown fruit to continue the farm's heritage and sustainability. The Blackman family's sixth generation is taking a more active role in the farm's future adapting to a changing agricultural climate just as all of their ancestors had to do.