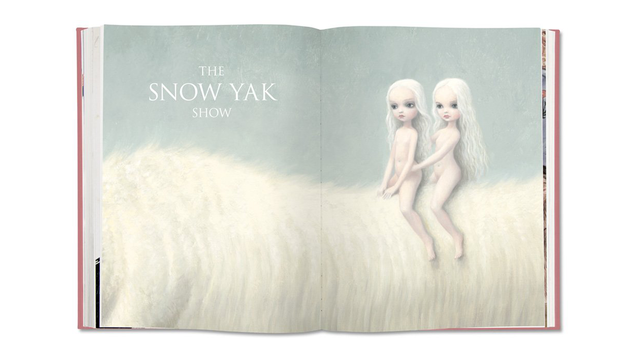 Blending themes of pop culture with techniques reminiscent of the old masters, Mark Ryden has created a singular style that blurs the traditional boundaries between high and low art. His work first garnered attention in the 1990s when he ushered in a new genre of painting, "Pop Surrealism," dragging a host of followers in his wake. He has trumped the initial surrealist strategies by choosing subject matter loaded with cultural connotation.

Pinxit, whose title refers to the Latin term meaning "painted by," is organized by the themes of Ryden's major exhibitions"”The Meat Show, Bunnies & Bees, The Tree Show, and so on"”and includes collected essays by Yoshitomo Nara, Carlo McCormick, and others, and a new essay by culture critic Kristine McKenna. Ryden's paintings and drawings are reproduced using the finest technique available, and over a dozen of the paintings are foldouts that open to a staggering 150 cm (59 inches) across.

Many books have been published on Mark Ryden before, but none like this large-format monograph, released in a boxed Collector's Edition of 1,000 numbered copies, each signed by the artist; and also available in an Art Edition of only 50 copies, which come with an artwork. This sweeping retrospective brings together nearly two decade's worth of Mark Ryden's paintings and works on paper, broadening the horizons of his uncanny universe and bringing it to the world, one big page at a time.